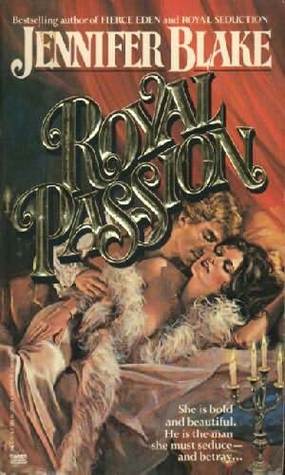 In my rave review of ROYAL SEDUCTION, I talk a bit about my plan to binge-read Jennifer Blake's books. The TL;DR version is that, basically, I think it's awesome how she's always putting her books up for free promotions in the Kindle Store and rather than letting her books molder away in Kindle Cloud purgatory like 90% of the other free books I have on there, I was going to read 'em all.

ROYAL PASSION seemed like a good place to start. I loved ROYAL SEDUCTION so much that it instantly became one of my new favorite bodice rippers - the sexy hero, strong heroine, beautiful writing, and oh-so-quotable dialogue made it an instant favorite.

ROYAL PASSION is a sequel to ROYAL SEDUCTION, although I think both could work as standalones. Mara is the daughter of Andre Delacroix (the "other" love interest of Angeline, the heroine of the first book). Her father is super busy working on his plantation and her mother died of a broken heart (she couldn't compete with St. Angeline and Andre apparently never got over her - Mara's MIDDLE NAME is Angeline - creepy), so she spends a lot of time with her grandmother. Unfortunately, her grandmother is a few items short of a hand basket and learns in Paris that she has a gambling addiction... after she gets way into debt.

Luckily for her, the debt collector - and self-proclaimed villain of this story - Nicholas de Landes, has a handy solution: she seduces Prince Roderic of Ruthenia, finds intel on him, and persuades him to come to a certain place at a certain time, wink wink, nudge nudge, and he'll forgive granny's debts. Just in case she has second thoughts about this, though, he's taken her grandmother hostage to be EXTRA SAFE, and will hurt her if Mara doesn't comply.

Mara is sped by carriage to a gypsy camp and then LITERALLY THROWN OUT OF THE MOVING CARRIAGE for Roderic to find. She is a terrible liar and apparently they were all out of spines at the spine store on the day that she was born, because girl has no backbone. None. She stammers something about amnesia and lost memories, and it's so obvious that Roderic does not believe her - so what does he do with the strange, suspicious woman who shows up at his gypsy camp? MAKE HER HIS HOUSEKEEPER! Because that's totally a great idea. Good job, Roderic.

From there, the plot gets a little dicey. There's some hot scenes between Roderic and Mara (unlike the first book, no forced seduction), there's some political intrigue and talk of the French rebellion, par II (following the uncertainty of the first one), there's swashbuckling, a secondary romance between Brienne of Tarth (only her name is Trude, so let's call her Brienne of Trude) and a count, and a teriary romance between a princess and her gypsy bodyguard - and, oh yes, a last minute daring escape! ...Just like the first book. In fact, they even allude to the events of the first book.

You know, IN CASE YOU MISSED THAT SUBTLETY. Wink, wink, nudge, nudge.

On the surface, ROYAL PASSION shares many of the same attributes that made ROYAL SEDUCTION such a win for me: lots of action scenes, a sexy blonde hero, political intrigue, and gorgeous writing. Unfortunately, ROYAL PASSION had many things that ROYAL SEDUCTION didn't that detracted from my enjoyment of the novel. There's tons of historical word dumps in here reminiscent of Victor Hugo's rambles about architecture in HUNCHBACK OF NOTRE DAME (which is appropriate because he has several cameos in here). Roderic isn't as icy-hot as his father, Rolfe; he's more of a sarcastic jerk, a la moody teenage boy, circa 1999. Mara is a wimpy heroine and didn't have me rooting for her or applauding her the way Angeline did in the first. Lastly, and most damningly, the climax of the book "felt" like it happened around 75%, which made the last 25% seem extra drawn-out and slow. (An entire chapter about boat racing and the river didn't help.)

I'm going to give this 2.5 stars because the sex scenes were really, really good and the first 3/4 of the book had decent tension. As a sequel, though, it doesn't really live up to the original, which is sad. I'd suggest reading the first book and just stopping there, but if the forced seduction element really puts you off, this book might be a safer read for you because it's definitely much less "intense."