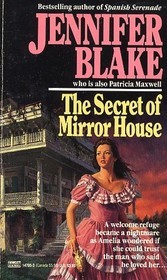 A lot of gothic romance novels have really similar plots, but with THE SECRET OF MIRROR HOUSE, I had an especial case of deja vu, because it felt like a mashup of two other gothic romances that I read and enjoyed a lot more: Dorothy Eden's DARKWATER and Jennifer Blake's other book, DARK MASQUERADE. That's never a good sign.

The plot is pretty basic. Following a tragedy (the death of her mother), Amelia comes to live with her relatives at Mirror House. Once there, she realizes that they're all pretty awful people who don't seem to want her to be there, and shortly after her arrival, ends up becoming victim to a number of odd and sinister tricks, including being run down in the woods and nearly being left to drown in a swampy lake. Dun, dun, dun.

The "secret" in this case is with regard to why Amelia was invited to stay at Mirror House in the first place, and the strange, masked woman who roves the halls at night like a ghost. I wanted to be more involved in this mystery than I was, but sadly, the twist was very similar to the one in DARKWATER, down to a very similar character trope. I was also really bored for most of this book. There just wasn't enough happening and I didn't care about any of the characters. Reba and Sylvestor were creepy creepsters. James was kind of smarmy. Amelia was bland and a little TSTL. Nelville is the typical Broody McMightBeABadman gothic romance hero, except this being set in Louisiana, he drops a ton of sinister aphorisms that make him sound like a Francis Underwoodesque character who wouldn't be out of place on House of Cards.

I think the best thing about this book is the humid, claustrophobic Southern atmosphere and beautiful writing. It's pretty chilly right now, but I could just picture that swampy heat and the sticky sweat pouring down my neck, and you know that's the mark of a talented writer, being able to set the scene like that. I'm working my way through Jennifer Blake's bodice rippers and gothic romances, and so far I like her bodice rippers more, because I think the temptation with a gothic novel is to be slow in order to draw out the mystery, whereas bodice rippers, as the name implies, are all about the action.

I'm curious if there's a difference between her novels published under the Patricia Maxwell name vs. the Jennifer Blake name, because I really enjoyed the last Blake gothic romance I read, but it was originally a Maxwell title (DARK MASQUERADE). We'll see, I guess!