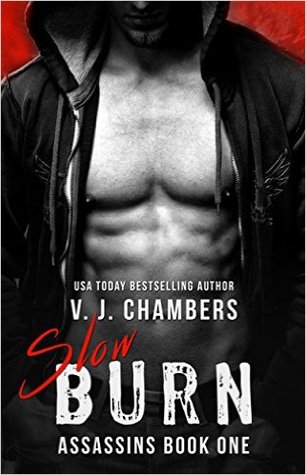 🎃 Read for the Unapologetic Romance Readers Halloween 2017 Reading Challenge for the category of: a romance where one of the characters is a murderer 🎃

Oy, this is disappointing. I really enjoyed Chambers's other two books, KILLING MOON and SKIN AND BLOND. Both were in genres that I'm generally highly skeptical about and the author managed to win me over with dark, tight plotting and stellar characterization. Even though I'm generally leery about assassin romances, I thought for sure that SLOW BURN couldn't be anything but good in V.J. Chambers's hands.

For the first 1/3 of the book, I thought this would be good. It has the hallmarks of her other book - damaged men and broken women who don't really "fix" each other (in fact, you could argue that they even make one another worse), but their love persists despite or because of everything, resulting in train wreck drama that makes it hard to look away. SLOW BURN actually reads like a prototype of SKIN AND BLOND, which also featured a promiscuous heroine and an asexual (or, I guess, demisexual in this case) hero with serious emotional problems. Unfortunately for this book, SKIN AND BLOND is the better book and I read that one first.

Here's what I think the author was going for: something like Anne Stuart's Ice series, only with a sci-fi bent. Because the heroine, Leigh, nearly died in a car accident (too much cocaine and alcohol). Her father, who works for a super secret organization, stole a serum that not only heals but also results in increased strength and regenerative abilities. He gave it to his daughter, and she lived; but now that super secret organization is after Leigh. She hides in plain sight, going to college, and taking her father's calls once a month or so on a disposable cell phone. Only, one day he doesn't call, and a man named Griffin shows up in her life claiming that he's been inoculated with the same serum and that her father has hired him to protect her.

It's an interesting premise, even if it is a bit cheesy in an 80s action hero way. My problems stem primarily from the execution. Leigh is an idiot. I like how drug addiction and sex addiction are portrayed in this book but oh my god, it was so much better in SKIN AND BLOND, where you could tell the heroine was competent even though her life was slowly being torn apart. Here, Leigh lacks all sense. This is a girl who is told "lie low" and immediately throws a party and starts snorting cocaine. Not just once, but multiple times. I get that addiction isn't convenient and I understand why the author did it, but it was really frustrating to read - I don't like TSTL heroines, and it would have been easier to stomach if there was something to her character other than the fact that she was beautiful and unashamed of her sexuality and used that to "cure" the demisexual hero.

That's another thing I took issue with in this book: sexuality. This was present in SKIN AND BLOND, but to a much lesser extent. The "asexual" hero keeps referring to himself as broken. In this case, it's a result of sexual abuse, but I don't really like asexuality being compared to a disability: in psychologically healthy human beings, it isn't. Since Griffin was a victim of abuse, it's natural that he wouldn't want sexual contact but that's not really asexuality, that's PTSD. The hero in SKIN AND BLOND referred to himself as broken too, but in that book, it was clear that he was a true asexual (but not aromantic) and just felt frustrated at not being able to live up to the sexually active, heteronormative standards set by society, and that his "brokenness" was an expression of that sentiment. Here, it felt muddled and weird. There's also a strange line from the heroine about the movie, Boys Don't Cry, in which she refers to the trans hero of that movie as a "girl dressing up as a boy." Which, again, I'd like to give the author the benefit of the doubt here, and assume that this is her way of showing the heroine's ignorance (she was, very), but it came off as sounding very misinformed.

Lastly, the pacing. The story just felt way too jumbled and uneven. The sci-fi element ended up making this book really cheesy, and not in a good way. There was too much emphasis placed on the sex, and it detracted from the action sequences. The "grand reveals" felt cliche. It really upset me because SKIN AND BLOND, in comparison, was tight and perfectly paced, with great reveals, excellent sexual tension, and a really smart and flawed heroine, who I didn't always like but always secretly rooted for.

One of the things I like best about Chambers is that she allows her heroines to make mistakes. There are too many books out there that demand perfection from their heroines: they must be beautiful, pure, and good, held to completely different standards than the hero, from whom we're far more quick to forgive much greater flaws. Chambers, like Gillian Flynn, has a penchant for flawed heroines who often do the unforgivable while somehow managing to appear human and even relatable. She just needs to tighten her pacing and omit some of the weird, unnecessary asides from her books in the cutting room.