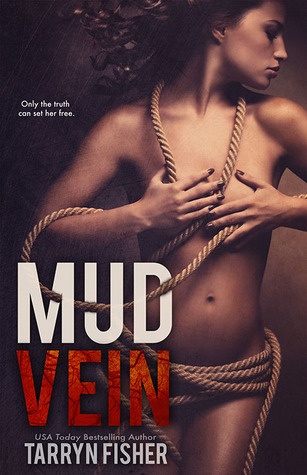 I put off reading this author for the longest time because her books were often spoken of in the same breaths as other authors whose works I couldn't stand. I assumed that they were all the same, and I am kicking myself right now, because MUD VEIN was kind of awesome and I could have gotten a head start on her books years ago.

MUD VEIN is not a traditional romance. It's dark and unpleasant, with a nonlinear story line. It actually reminds me of another book I read recently called THE GHOSTWRITER, in the sense that this damaged woman shrouded in mystery is the narrator of the tale, and it's all about her journey and her tragic love story as she tries to come to terms with herself and learn how to be human again.

Senna, the heroine of MUD VEIN, wakes up one day in a house surrounded by snow, penned in by an electric fence, and supplied with enough food to last a couple months. Also trapped with her is a doctor, named Isaac. The house is filled with clues that allude to a past that she'd rather forget, and secrets that she's never told to anyone...except for Isaac. Who captured them? And how do they get free? The answers to both questions are interlinked in a surprising way.

The story is chopped up into three seconds and it looks like my friends who DNF'd this (there were a surprising amount!) decided to do so in the second part. Which I get. The second part is where it starts to get slow and really depressing. I actually liked the minutiae, though, because it was the part of the story where we get to really know Senna as a person and a lot of the clues behind her imprisonment begin to fall into place. The first part is definitely the best, though - the gradual reveals are paced perfectly evenly, and have this "Netflix Original" vibe.

So why not five stars? That slow middle section. It was sloooow. I didn't mind reading it, but it didn't keep me locked in the way the first part of the story did. I also wasn't keen on the last chapter of the book - not because it was depressing, but because one of the twists didn't really make sense and wasn't foreshadowed sufficiently or explained particularly well. I was left feeling confused, and I don't think it was because I didn't understand what was going on; I think it was bad storytelling.

Still; this was a darn good book and I read it in a single day. One of my friends recommended this author to me because she said that her stories reminded her of my stories, and I guess that means dark and twisty - which I can totally get on board with. I love dark and twisty when it's done well, and this was done very well. I have a whole bunch of this author's other books on my Kindle and can't wait to start them, because the writing in MUD VEIN has left me feeling incredibly optimistic (although the story itself did not - yeesh).