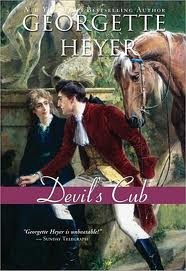 🎃 Read for the Unapologetic Romance Readers Halloween 2017 Reading Challenge for the category of: a romance written by an author who is dead 🎃

There might not be any sex in Georgette Heyer regency romances, but man that woman can pack more drama into these puppies than Julia Quinn at her most malicious. DEVIL'S CUB is downright soap opera-ish in terms of scope and characterization.

The plot is basically this - hold onto your bonnets: Dominic/Dominique (for some reason his name is spelled two different ways here) is a marquis and a rake and a wastrel who has resolved not to marry, instead flitting about with mistresses until he tires of them. His current prospect is a girl named Sophia Challoner. Her mother, foolishly, encourages the affair, thinking that she can use her daughter's pending disgrace as a means of trapping the marquis into marriage. Sophia is more than willing to let Dominique use her. Her sister, Mary, is the only one who thinks this is stupid.

One day, Dominique accidentally sends his plans for elopement to the wrong sister (he's forced to flee the country after mortally wounding a man in a duel). Wanting to save her sister, Mary goes in Sophia's place. At first he plans to use her as well, even making a threat of rape, but Mary shoots him with a gun. For some reason, this makes them get on fairly well and Mary even confesses (privately, in her head) to loving him shortly after....!?

At the same time, there's a character named Frederick Comyn who is in love with a girl named Julianna. They're supposed to be married as well, but Julianna thinks he's too stuffy (she's Dominique's cousin) and constantly provokes him to spark a light under his seat. Instead, she ends up offending him and rather than admitting wrong, loftily declares that being with Comyn would be marrying beneath her, anyway. Comyn ends up making a marriage proposal of convenience to Mary instead, seeing as how Dominique and his proposal to Mary have upset her (?!).

Obviously, there's a happy ending but it's a rough road getting there.

Why? Because all of the characters in this book, with very few exceptions, are odious AF.

Sophia, Mary's sister, is absolutely awful and takes an unpleasant amount of glee at the thought of bad things happening to Mary, even though Mary was attempting to save her honor. She throws tantrums, cries, and insults everyone around her, when she's not acting like a vain little slip. I really could not stand her, and thought it was odd that the book ended with her just dropping out of the plot.

Mrs. Challoner, Mary and Sophia's mother, is also awful, so keen to push Sophia into the arms of the marquis despite his reputation. She's also not very nice to Mary, calling her plan and declaring that she will be impossible to wed (which is rather Mary Sue-ish since Mary receives 2 marriage proposals and is constantly getting praise for being well-spoken and pretty).

Leonie, Dominque's mother, is utterly dismissive of her son's behavior and when she finds out that he may have abducted a girl, immediately blames the victim and makes light of the situation, basically saying, "Well, it's not like he tied her down and raped her." When people call her on her son's behavior, she insults them or their children. She's a truly awful woman. I hated her.

Julianna, Dominique's cousin, is just as spoiled as Sophia. I couldn't stand her for how she treated Comyn, who is the only other character I truly liked apart from Mary. She wants him to be forceful with him so she tries to provoke him into anger to make him "man up." I'm sorry, but that's borderline emotionally abusive, in my opinion; this is exactly how cycles of abuse are perpetuated. (And, disturbingly, several characters say how Julianna could use a beating to correct her behavior.)

Dominique/Dominic the hero was also not really a favorite character of mine. He had the potential to be a good antihero but at the last minute, Heyer pulls the punch and decides to make him fall head-over-heels for Mary (?), offering her anything she wants and basically going around acting like butter wouldn't melt in his mouth. Too many romance authors want to have their cake and eat it too when it comes to alpha heroes, and it usually doesn't work. It doesn't work here.

I'm giving this book 3 stars because the story was interesting and the dialogue was witty, and Mary was a pretty good heroine (she gave as good as she got, and her properness was quite amusing). If you're new to Georgette Heyer, though, don't start with this one. She has much better books in her bibliography.