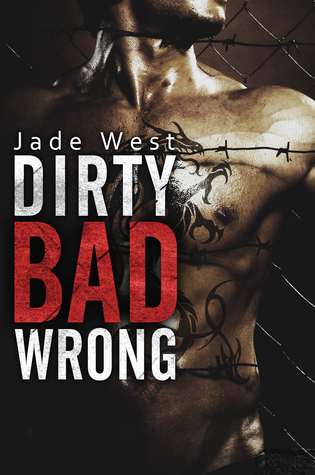 Sometimes you read a book so awful that you almost need a new rating system to express how bad it really is. DIRTY BAD WRONG, which should be called DIRTY BAD GROSS, falls under that category. It reads like FIFTY SHADES OF GREY fanfic, like someone read E.L. James's book and thought to herself, "Hmm, this is pretty messed up - but I could write something even more messed up!" If you think I'm kidding, there's even a FSoG reference in here, as if the author herself was like, "Didn't you get it? Didn't you get my clever joke??"

THIS IS ME LAUGHING:

Amazon pulls a lot of my erotica reviews for being too "racy" so let's see if I can swallow some of my rage and keep this G-rated.

The problems start pretty early on with some of the grossest sex scenes I have ever read. If you are curious, you can check out my Goodreads status updates for direct quotes, but they involve words like "squelched" and "sluprs"  and "thwacky." Oh - and my personal favorite, "a hungry baby with teeth" and, "filthy brown lips" to refer to something that isn't a mouth. Guess what it is. GUESS.

The problems continue when James and Lydia want to get together. James and his friend are gleeful over the fact that Lydia used to self-harm, because apparently to them, cutting = a sign of enjoying pain in bed. Which, no - and also, the fact that NEITHER of them expresses any real concern over this is incredibly disturbing to me, since a real Dom would either a) be reluctant or b) be hyper-vigilant about initiating a relationship INVOLVING PAIN AND HARM with someone who used to do that to themselves. But not James. James is just like, "Ka-ching." (Insert swearing here.)

But Lydia is also a jerk. When talking to James's friend, Bex - the same friend who gleefully reported to James about Lydia's self-harm, I might add - she tells Bex that she wants to get with Masque. Bex (who knows Masque's real identity), tells her that if she wants to get with Masque, she must first seduce James. Lydia makes a joke about date rape and asks if Bex has any roofies. Bex finds this so amusing and tells Lydia that she won't need them. What. The. (Insert swearing here.)

Masque is into some pretty non-standard stuff, and while I didn't find this "offensive" as the author warns in her little author's note on Goodreads, I did side-eye it a little, because that author's note does not really prepare you for women getting whacked (sorry, I mean "thwacked") on their hoohahs with metal rulers and the enthusiastic pee-drinking that happens in the last act of the book, all with some of the most unfortunate phrasing and disgusting metaphors possible. Are we all being trolled? Maybe. All I know is, I thought this book was DIRTY BAD STUPID, and I'll be giving the rest of her books a hard pass.