Must Love Ghosts by Ani Gonzalez 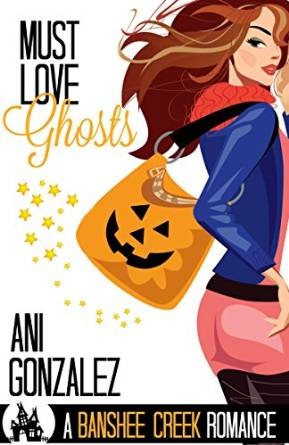 🎃 Read for the Unapologetic Romance Readers Halloween 2017 Reading Challenge for the category of: a romance novel romance about ghosts 🎃

I have a love-hate relationship with reading challenges. On the one hand, sometimes I find new gems I never would have thought to pick up otherwise (for example, this year's challenge led me to discover a new favorite author, V.J. Chambers). On the other hand, sometimes they have me scrambling around in the Daily Deals/Free sections of the Kindle Store in a panic, desperately seeking free or cheap books to complete a category I do not like.

MUST LOVE GHOSTS sort of falls into the later category. I went through this very brief period in college where I was reading romances that fell more on the supernatural side of the paranormal romance fence, i.e. psychics, realistic ghost novels, etc. I liked them because they felt more plausible than werewolves, because it's easier to believe in inexplicable occurrences in an old house than it is a hulking GQ model who turns into a furry once a month. (And no, I have nothing against furries or GQ models.) Then I got sick of them and haven't picked up another since...UNTIL NOW.

I picked up MUST LOVE GHOSTS two Halloweens ago because I thought the jack-o-lantern satchel on the cover was cute. The premise was also intriguing. Abby is a girl who lives in a small Virginia town called Banshee Creek that is rife with history. It's a destination location for those interested in the occult and paranormal and many who live there have built their lives around capitalizing on that. Not Abby, though, who's a singer in a folk/country band (although not by choice). This whole time she's been trying to get over the grief of losing her fiance in Afghanistan.

Mike was a friend to both Abby and Cole, the fiance. He's also been in love with her since the day he met her and has tried to hide his feelings out of respect to both his friends. Now that Cole has been dead for two years, though, it's getting harder - especially because he has to deliver an important momento to Abby that he's been holding onto her for years, from Cole. What makes hiding his feelings even more difficult is the possibility that they might not be unrequited.

This was a pretty good story, honestly. It doesn't have a very significant paranormal element. Most of the story focuses on Mike and Abby and their growing attraction to one another, set against the backdrop of this small town vibe. The writing was solid and I don't think I spotted any typos. Both characters felt real in a way that romance characters sometimes don't, by which I mean they are annoying human beings. Mike, especially, got on my nerves with his Debbie Downer routine, and the fact that he was constantly playing Officer Safety, and telling everyone, "that's not safe!" I'm the same way, but he even got on my nerves - and that says something.

MUST LOVE GHOSTS is a fun, light read though. It kind of reminds me of those "cozy mysteries." There isn't a lot of tension and it's mostly written for light entertainment and feeling good. I think this would be a good rainy-day read in a warm, cafe setting. Possibly with a cinnamon flavored pastry.