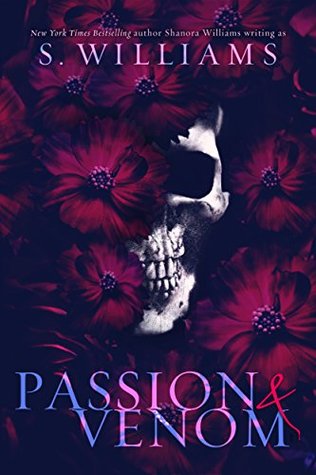 🎃 Read for the Unapologetic Romance Readers Halloween 2017 Reading Challenge for the category of: a romance novel with a skull on the cover 🎃

I've read several mafia romances and so far all of them, without exception, have been incredibly stupid.

My expectations when I picked up PASSION & VENOM were low, but I needed a book with a skull on the cover for a Halloween challenge and it was free (and still is free as of 11/4) in the Kindle store, so I figured, "Why not? YOLO."

To my surprise, PASSION & VENOM was actually a decent read. It has the dubious honor of being the only mafia romance I didn't want to throw out the window.

Unfortunately, it is still kind of stupid.

There are two kinds of stupid. There is the kind of stupid that makes you want to throw books out the window, and the kind of stupid that feels incredibly fun and goes best with popcorn. This book is the latter. In fact, it shares many attributes (good and bad) with the books of one of my favorite authors of all time: Bertrice Small. I would call her books stupid, but I love them all the same. The over-the-top situations, bad writing, inexplicable violence, and d-bag heroes are part of the fun.

PASSION & VENOM is about a girl named Gia. On the day of her wedding, her husband is killed, Kill Bill style, and she is kidnapped and kept in squalor under the constant threat of torture. Her only companion is a man without arms - her captors cut his arms off, and this man warns her that they might very well do the same to her - or worse.

Her captor is a man named Draco Molina. One thing about him that I appreciated is that the author shows he is a bad guy without beating us over the head with it. He is not one of those ill-tempered buffoons who shows off his "might" by waving around a gun and yelling and basically acting impulsive. Everything Draco does is cold and calculating. He is scary, and some of the (graphic) scenes in here are downright disturbing, straight out of a 1970s bodice ripper.

There were two things about this book that I really couldn't forgive and ultimately these two things were what dragged down the rating of this book from a 4 star to a 3 star rating.

1. Gia doesn't really have much in the way of personality and falls for her captor way too quickly, given what he'd done. In the beginning, I felt for her. She was kidnapped and wanted to escape. I liked her resourcefulness and hoped to learn more about her as a character. I don't feel like she really developed from that point. She was a highly superficial character who only really had two facets: attempt to escape and fail spectacularly and fight attraction to Draco. He was a bad man. I would have liked to have seen more conflict about that attraction.

2. The writing is, at times, really terrible. The heroine refers to her vagina, repeatedly, as "her sacred place." People "smash their lips together" instead of pressing them together in thought. Some of the sex scenes are cringe-worthy and involve the phrases "I am making his face my b*tch" and "my nectar coating all of him." Blech, no, thank you. Using nectar for sexy times is almost as bad as "cream."

Lastly, I wasn't thrilled that Draco's relationship to her and her family is teased at throughout the entire book, only to end on a cliffhanger. I also thought that the relationship between Gia and Francesca was interesting but it yo-yo'd a lot for the convenience of the plot, and it might have been nice to see more development there (as opposed to the sudden events of the ending).

Overall, thought, PASSION & VENOM was a pleasant surprise. I found it to be a fun, quick read that hit all the same buttons as a 1970s bodice ripper pulling all the triggering stops. I don't recommend this for the faint of heart (so anyone who doesn't appreciate reading about violence, rape, gore), or for people who balk at the idea of trashy books for entertainment value (ya squares!), but if you like dark romances where the villain gets the girl or are fed up with bad mafia romances, like I am, then you should probably give PASSION & VENOM a try.