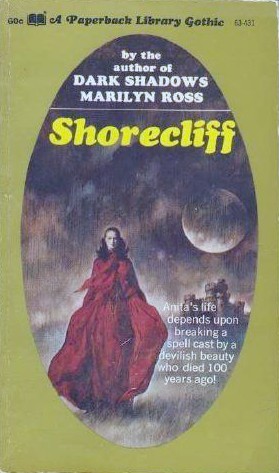 🎃 Read for the Unapologetic Romance Readers Halloween 2017 Reading Challenge for the category of: a romance set in/near a haunted house 🎃

SHORECLIFF is a strange little book. The cover is deceiving, because that old skool gown and misty castle would have you thinking that this is a wallpaper Victorian about some governess who might be in love with a murderer, etc. But no. SHORECLIFF is set in the 1960s (Twiggy is mentioned).

Anita and Charles inherit a crumbly old mansion when one of his relatives kicks it, much to the dismay of some of his other relations, including his cousin and foster sister, Pat. One of the clauses of the will states that Pat gets to continue to live with them, even though the house and the bulk of the fortune goes to them.

Once there, Charles gets the idea to write a book about his ancestress, Amanda Shore, who, according to legend, murdered her husband and then went to France, where she had a beauty treatment that coated her entire face in enamel. This part was confusing to me, because the words the author used made it sound like the enamel was injected into her face, but I suspect that - since this would have been happening in the 1860s (100 years ago, from "today", i.e. the 1960s, according to the cover) - the enamel treatment was actually referring to lead enamel, the popular makeup of the day.

Anyway, Charles starts acting weird and Anita starts seeing what looks like the ghost of Amanda looming around the house. Charles accuses her of sabotage. Anita accuses him of being in love with Amanda and Pat, by turns, and claims that Amanda is coming to get her revenge, etc. Their marriage suffers. There's a psychic who appears and makes ominous comments that for some reason most people seem to take seriously. More stuff happens, then there's a Scooby-Doo style unmasking.

I read this book while drinking wine, and went through two glasses over the course of this book. Wine did not improve the logic of this storyline or the characters' actions (although it actually was a lovely compliment to that dry, sweet, "old book smell"). I see that this author also wrote some novelizations of the vampire soap, Dark Shadows, which helps explain the expositional dialogue and unnecessary melodrama. It was pretty bad. Still, it was not the worst gothic novel I have read - that dubious honor goes to MISTRESS OF THE MOOR. #IRegretNothing