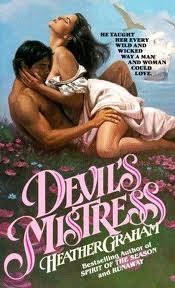 🎃 Read for the Unapologetic Romance Readers Halloween 2017 Reading Challenge for the category of: a romance novel with a witch 🎃

I needed a romance about witches for a Halloween reading challenge, and I figured a historical romance novel about the Salem witch trials was close enough. Because we all know that the whole point of these challenges is to skirt the rules as closely as possible, right?

The premise of this book sounded fantastic. And at first, it was. Brianna's aunt, Pegeen, is burned as a witch in King James's Scotland by a fanatical witchfinder named Matthews who is so twisted up about his sexual urges that he's decided attractive woman = witch.

When Brianna comes running up in horror, only to catch the tail-end of her aunt's murder, Matthews is struck by her beauty. And naturally, anything that makes his naughty bits feel funny must be using the foulest magics indeed, so Brianna is also declared a witch, and he and his men chase her all the way to the docks. Brianna ducks into an inn, where she encounters Sloan, our hero. He figures she's the prostitute he ordered and Brianna, fearing for her life, rolls with it. When Sloan later figures out the truth, he feels responsible for her, and decides to protect her. The two of them flee, with Matthew in pursuit, and Sloan declared witch-by-association. The chase is on.

There's definitely a Frollo/Esmeralda dynamic between Matthews and Brianna that feels super creepy. Matthews was a great villain, and I think it was a huuuuuge mistake to kill him off in the first quarter of the book, because everything after that feels like filler - especially since the h and the H have sex pretty early on in the book, and the will they/won't they? tension that keeps most romance readers (aka, "me") turning the pages is absent, since it's clear they are both super into each other. That's when Graham whips out her trump card: the hero is married to another woman and has been this whole time, which is why the h and the H can't get married. But it's not really cheating because she's a madwoman in an attic. Brianna just got JANE EYRE'D!

Brianna, meanwhile, leaves Scotland for New England - because it's totally safe there. No witch-related executions in Salem or anything. *rolls eyes* So she and her kid live with her cousin, Robert (or Rupert?) (who she married after she found out about the OW). The kid is Sloan's. Witch fever hits Massachusetts. The people featured in The Crucible are mentioned, which was a nice little Easter Egg, but the Puritan witchfinders are super lame compared to the sinister figure that was Matthews. Rupert/Robert gets accused of being a witch and kindly dies off in the last act, freeing Brianna to be with Sloan. They rediscover their carnal passions and the book ends with a happily ever after.

I wanted to like this book so badly but it was so boring that I ended up skimming the last 100 pages because I could feel time draining away with each page. The ingredients for a good story were here, but they were never fulfilled. Matthews was such an excellent villain, and he really was not permitted to go full-on crazypants by the author the way a 1970s bodice ripper-type novel would have. I also couldn't stand Brianna, who is not only TSTL, she's also foot-stompy and averse to following even the most simplest instructions (especially if they are for her own good/will save her life). It's hard to like a heroine who has two emotional settings: horny and outraged. JUST TWO. Sloan wasn't much better. He was kind of a jerk. Not really an alphahole. Just a bland, unlikable "dear john" type.

I kept hoping Matthews would return as a zombie in the third act, but that didn't happen.