How to Love a Monster by Lyssa Dering 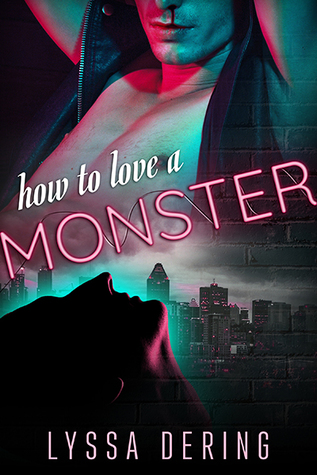 🎃 Read for the Unapologetic Romance Readers Halloween 2017 Reading Challenge for the category of: a romance novel romance about zombies 🎃

The blurb on Goodreads is super confusing, because I don't remember reading any of the parts about Sera controlling his own brain or the details behind the government mandated experiments. All of that was sort of hinted at, but as far as I can remember it was never stated in such black and white terms.

Sera is a psychic who has, apparently, died. While he was alive, he was friends with a guy named "Wish" who promised him that he was going to create this great mental afterlife that he could frolic in when he died: think heaven, only for psychics, except that it's called, appropriately enough, "Wish City."

When Sera gets to Wish City, he finds out - surprise, surprise - that it's not exactly what Wish promised him. Paradise is downright ugly, with drugs and cheap sex filling the streets. Everything is dark and grungy and completely unlike what Sera expected.

Fiend, like the city, was also dreamed up by Wish, and like the City, he's a creation that managed to get loose from his creator and take on a shape all of his own. Fiend likes to eat brains, and next up on his cerebral prix fixe menu is Sera. Only... he's attracted to Sera physically as well, and decides to toy with his food before eating him - but that doesn't quite go as planned, either.

HOW TO LOVE A MONSTER falls into that hateful three-star review territory for me. There was nothing particularly wrong with the story but it didn't wow me enough where all I wanted to do was gush. It entertained me, and then we parted ways. I did think the world building was very odd, and while original, there were many aspects that confused me and could have used more fleshing out.

While reading, I kept having this sense of deja vu, wondering what this book reminded me of. Then it hit me: those weird dark fantasy movies from the late 90s like eXistenZ (1999) and Dark City (1998). Both of those movies had an incredibly original world with a compelling storyline and scenery, but - for me - also felt kind of confusing and sometimes even nonsensical (and not in a good way).

I bought this while it was 99-cents and for that, I think it was a good deal. If you're a fan of bizarre stories and/or are looking for m-m erotica that doesn't fit the usual mold, you'll like this, I think.

P.S. I realize that Fiend isn't a zombie, but since I don't read zombie novels for the most part, I decided to go ahead and use him for a zombie category on my Halloween romance challenge. He eats brains - I figured that was close enough.