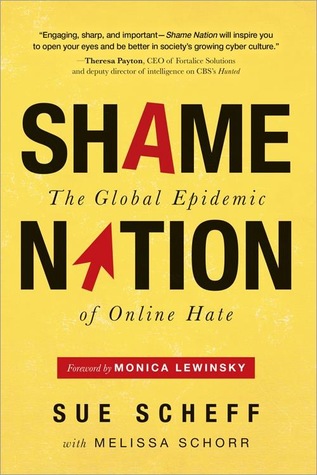 When I was in high school, I was bullied online by several students I went to school with. It was in the early 2000s, when the internet was still a vast wilderness, and many people could say that they didn't "use the Internet" and not be given a look, like, "What, why not? What are you trying to hide?" These students said pretty much every awful kind of thing you can say to someone - vague threats, specific threats, encouragement to commit suicide, transphobic insults, homophobic insults, ad hominem attacks, slurs. They said things the types of things that go viral today, and would result in a suspension - at least. But my school simply shrugged its shoulders and said it was online, there was nothing they could do. The students got away with it.

SHAME NATION talks about many incidences of bad behavior online. Some occurred on a large scale, some on a small scale. Some involve famous people, others people who could be your next-door neighbor. The types of behavior are pretty broad in scope - trolling, abusive memes, online stalking, extortion, revenge porn, online harassment, etc. Scheff discusses the subjects in detail, with tips on reputation management, how to be safe online, how to recognize and deal with online harassment when it happens to you, and the various forms it can take. Sometimes books like these can be preachy or laughably out of date, but SHAME NATION was neither. If anything, Scheff shows just how "gray" the internet is when it comes to the mob mentality of vigilante justice/injustice, and how quickly witch hunts can develop.

Speaking as someone who has experience with this firsthand, a lot of this really hit home. I never fully understood why the students who picked on me went after me the way they did. Probably because I was a weird, insecure kid and an easy target, and it was a way of compensating for their own feelings of teenage weirdness and inadequacy. That's something SHAME NATION talks a lot about - how many trolls are often harboring deep, internal conflicts of their own, and trolling is an easy outlet to subvert some of that distress in a sadistic, but cathartic release. Obviously, I came out of it all right, but for many years, I had trouble trusting people. I blew off many people who wanted to befriend me and be nice to me because I assumed that their overtures of kindness were "traps."

Overall, I think this is a really useful book. I wish they taught this stuff in schools. The parts especially about maintaining your online reputation and not posting offensive or mean things, racy or controversial photos, and leaving a positive digital footprint. With digital technology becoming more and more integrated into our every day lives, it's more important than ever to be mindful about online behavior - especially since many colleges and potential employers are looking at these things to see what people are up to. The parts about bullying and standing up to bullying are also valuable, and I thought the case studies added that personal touch to show how real people (and not just statistics) are affected by that decision to click "post" or "upload."

I did have a feel qualms about some of the advice listed in here - I'm wondering if one of the authors is a marketer, because sometimes the tips for reputation management (linking to your personal blog on news article comments, for example) seemed a bit too promotional. I also don't think it's a good idea to always call people out by name, since some people enjoy the attention, and also, more broadly speaking, because one violation of privacy does not always cancel out another, and leading witch hunts against trolls just creates a culture of witch hunts - and does anyone really want that?

If there's a takeaway message here, I think it's that online harassment often feels insignificant to the perpetrator and to onlookers, because they are many steps removed from that hate, and also separated from it by a screen. But to the victim of the harassment, it feels immediate, real - in some ways, worse, because I think for many people (at least for me) their online persona is really the core of who they are, when they are freed from the confines of their social hierarchy, and so those attacks can sometimes be even more painful, even more personal, even more devastating. I see a lot of trolls protesting the deletion of their attacks as a suppression of freedom of speech, but bullying and harassment don't fall under freedom of speech because it's basically a form of assault or an incite to riot, and your first amendment rights (or the equivalent of them in your country) do not grant you the right to hurt people or commit acts of violence against people, physical, emotional, or psychological.

And really, how much do you lose out of your day by taking a few seconds to rethink your words before posting and thinking about the consequences of your actions and who might be hurt by your words? Those few seconds might have saved me years of misery; they might save someone else's life.