My Secret: A PostSecret Book by Frank Warren 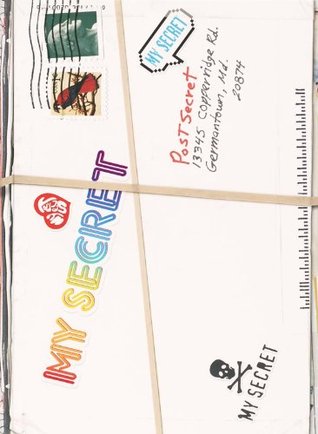 The concept behind PostSecret is pretty cool. Mail in an anonymous, decorated postcard with your secret. Wait and see if it ends up on the website and rejoice in the fact that you have lessened your own burden, just a little bit.

I bought this book several years ago from a used bookstore for $1. I guess this particular version is intended for teenagers...maybe it's the way the postcards inside are written, maybe it's the bubble stickers in the back (mine still had most of them intact on the sheet, even after buying it used). When I bought this book I was only a little older than most of the people writing the cards, and I wasn't as happy with my lot in life as I am now. As I read through the postcard entries, I was astounded at how many people's secrets sounded like they could have just as easily been my own - or, if not my own, how unusual and interesting people can be behind the facades we wear for the world, and how reading something that is posted anonymously is somehow much more acceptable and less shocking than blurting it out during a conversation. I think many people are silenced by the constraints of social mores; we can't be honest because it's rude or weird, so we keep our secrets - big and small - to ourselves.

This book was published before things like the Whisper App, or the YouTube equivalent of the Burn Book from Mean Girls, "Story Time," became super popular. It shows in the photographs chosen - most of them look like they were taken with real film. Many are crafted, some elaborate, others scribbled sharpie on torn-out scraps of paper. They're all so different, and yet they form a cohesive whole. There's something beautifully symbolic about that, I think. The secrets themselves also cover a broad spectrum. Some made me laugh, like the clown who took the light-strewn xmas reindeer from his neighbor's lawn and made them "hump" and the person who anonymously mails people e.e. cummings poems. Others, like the person who felt responsible for their friend's drug overdose, or the many survivors of rape who felt like it was their fault or, worse, didn't feel like they felt at fault enough, were heartbreaking. There are contributions on all sorts of thorny topics, like suicide, depression, and sexuality. Some are hopeful, others despondent. There were a few that made my heart hurt and one or two that moved me to tears (the one about the grandmother made me so sad).

MY SECRET is a really amazing book. It made me think about myself in a different way, and also made me feel better about some of the things that were upsetting me at the time. Periodically, I'll dig it out of my "keepers" box and page through it, and each time I read it, different postcards resonate with me depending on how I'm feeling at the time. I think every high school library should have a copy of this - if only so that kids, no matter what or how they're feeling, know they're not alone.