This Is a Book by Demetri Martin 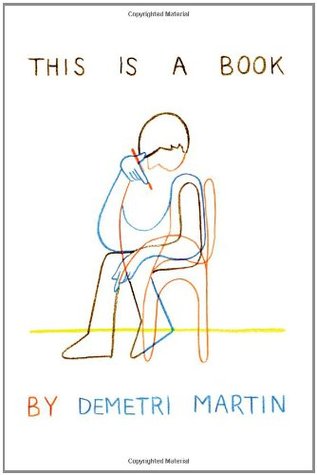 Demetri Martin is a comedian. I used to watch his stand-up series, Important Things with Demetri Martin, pretty avidly. He wasn't always funny, but he had an interesting way of looking at the world. One of my favorites was his "This Is a Sketch" segment, where he gets out an artist pad and starts creating these drawings that start out one way and end up totally different by the end.

THIS IS A BOOK is obviously a play on his "This Is a Sketch" segment of his comedy routine. I bought it while it was on sale, because I've been meaning to read it forEVER. In fact, when it was available on Netgalley, I tried to apply for an ARC (I was rejected. #bookreaderproblems) The sale was the perfect excuse to break my self-imposed book-buying ban (which is really more of a formality anyway) and buy THIS IS A BOOK.

THIS IS A BOOK is really strange. There are drabbles and essays, poems, short stories, drawings, and mini-plays; you never know what you're going to get until you turn the page (I mean, the title is a giveaway, but I think most people skim over titles). I went into this expecting a celebrity memoir, so I was surprised that this was fiction. I was also surprised by how meh I found his content, since he's so funny in standup.

Short stories:
I skimmed over these mostly. Demetri Martin may be good at telling a story on stage, but it doesn't translate well to book form. Part of this is his energy and his timing on stage. It's harder to have that be just effective on the page, especially if you're relying on your audience for feedback.

Poems:
Unless you're writing a limerick, it's hard to make a poem funny. His "Rain Rain Go Away" poem in particular just seemed like it was trying way too hard.

Drabbles:
These are shorter than the short stories, and better, in my opinion. He wrote this great story about a woman getting stung by a bee, and then writes about that from everyone's POV, including the inanimate objects around here. The surprise ending makes it extra funny. I also liked "Titles", which is a fantastic short about aliens coming to Earth and getting confused by the titles of our rulers. "We're Pregnant" is also great because it takes that twee statement to the next level.

Plays:
These were fine. Some of them were meh, but there were some that were funny.

Drawings:
Easily the best thing in here, which only makes it more of a shame that there weren't more of them. Martin's a decent artist, and his minimalist style really lets the humor shine through. He also makes really funny graphs and charts. Ever wonder how GPA is similar to the # of limbs you have?

I would not recommend THIS IS A BOOK to people who are fans of his comedy stand-up and are going into this expecting that same level of humor. There are spurts of good content, but for the most part it feels like a watered down, "trying too hard" version of his regular routine. Who knows, maybe these are rejects from his sketches that he didn't want to scrap. I'd stick with "Important Things," although I'm really curious about his drawing collection now, POINT YOUR FACE AT THIS.