It's All Absolutely Fine by Ruby Elliot 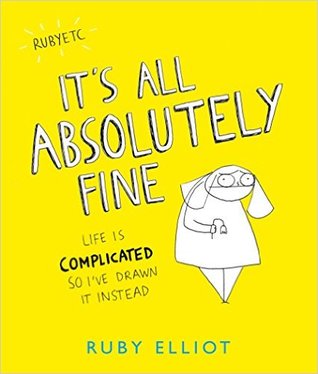 I might be the first person that applied for this book who had never heard of the author before. I inhabit a very small corner of the internet these days, and haven't had time to creep on Twitter or lurk on Tumblr. Funny story: initially, I thought that this was Allie Brosh's newest book, and just about fell over myself trying to get a copy. It wasn't, though, which is why you should read the titles of books (and actually look at the cover) before greedily clicking through.

Mistaken identity aside, it's worth mentioning that IT'S ALL ABSOLUTELY FINE is more than just passingly similar HYPERBOLE AND A HALF, and I think readers and fans of the latter will probably like the former as well. Their drawing styles, language, and sense of humor are very similar, as is the content. (I looked through the reviews, and I'm honestly surprised more people didn't mention this.) Both comic book artists use comic strips to tell slice-of-life stories that range from silly idiosyncratic tales to serious battles with mental illness.

They have their differences, too, though. I think Allie is more realistic and quirky, whereas Ruby takes the reductio ad absurdum approach, taking her points and exaggerating them to the point where they seem ridiculous, even though you get what she's saying. Such is comedy. Allie also writes mostly about depression and anxiety, whereas Ruby writes about bipolar disorder and eating disorders. Ruby also has random little sketches interspersed throughout her book that range from puns to witty observations about life. They lighten the mood and provide a nice break from the deeper stuff, like Ruby's essays. Allie is also more well known, but that could easily change once more people get wind of this book.

I really enjoyed reading about Ruby Elliot's story. After reading Roxane Gay's depressing but important feminist anthology, DIFFICULT WOMEN, I was hoping for a more uplifting read. "A comic book will cheer me up!" I thought - incorrectly. As funny as it could be, IT'S ALL ABSOLUTELY FINE got a little too *real*. Ruby is good at diffusing serious topics with humor while still being able to make her point without watering down the message in the slightest, but it's still a very serious message and should be taken seriously. (LOL so redundant.)

If it were me, I'd sell IT'S ALL ABSOLUTELY FINE and HYPERBOLE AND A HALF in a bundle, because I think they compliment each other well and would make a great gift set (and get Ruby more attention, too). Honestly, it's so wonderful to see so many people writing about mental health in such an accessible and engaging way. It allows more people to join the dialogue, and makes those who need to talk feel like they're in a better position to do so. For that reason, I think that IT'S ALL ABSOLUTELY FINE would be an excellent classroom or counseling resource.

Thanks to the publisher/Netgalley for the free copy!