Power of the Matchmaker by Heather B. Moore 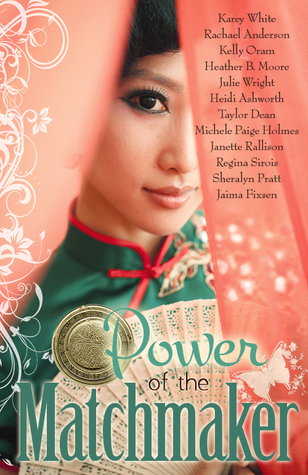 My first thought when regarding this book was one of suspicion. Really, 12 authors wrote this 60-page novella? That can't be right. And yet, there they are, all listed on Goodreads, and stamped onto the cover as well. Apparently this is the flagship book in a series about matchmaking, and this is the principal character.

Let's go with the first author credited on Goodreads. That'll be you, I suppose, Ms. Heather B. Moore.

Luckily, POWER OF THE MATCHMAKER isn't quite as confusing as the author kerfuffle behind it. The writing is actually fairly decent, considering that this book was free. (I don't know how many of you regularly venture into the "free" section of the Kindle store, but you can find some really strange stuff in there. Hence all the really strange reviews you're seeing on GR from me.)

POWER OF THE MATCHMAKER is about a young Chinese woman named Mae. Mae is in love with her friend Chen and is so sure that they will be assigned together by the local matchmaker. But nope! Instead, the matchmaker pairs Chen with another girl, and pairs Mae with Bohai.

Mae decides that the best solution to this is to say "eff you!" to her parents, fiance, and Chen's parents and fiance, and run away with Chen. She goes to fields outside his house, and he meets her there, but tells her that he isn't going to run away with her because it wouldn't be fair to his family or his fiance. Mae, our charming heroine, says, oh, but that won't matter if we run away together! Chen tells her no, and gives her a beautiful jade comb as a good-bye gift, telling her that he loves her but must be dutiful.

Mae decides to run away.

What follows is a short but thorough journey of idiocy, in which Mae is too stupid to steal food and too stupid to earn food. She cries and whines a lot, expecting opportunity to fall before her, because she's Mae, don't you know, Queen of the Special Snowflakes. She could sell the comb, sure, but no, she says that selling the comb would be as bad as prostitution. Literally, she says that.

Anyway, after getting drugged by an evil madam and her evil associate, and sitting outside on the porch of this one family while crying and hoping they'll give her a job out of pity, she ends up passing out somewhere and getting rescued by a matchmaker. The horror! Mae hates matchmakers!

But this matchmaker is a good matchmaker, because she feels sorry for Mae's "plight" and tells her that the other matchmaker should have matched Mae and Chen. Anyway, matchmakers apparently have magical powers and the ability to live for about three hundred years as long as they use their powers to selflessly help others while abstaining from love themselves.

This was a lot of ridiculousness to swallow. I felt like there weren't quite enough pages in this book to explain all this, but since this is a prologue to what looks like 12 other stories, maybe explanations are forthcoming in later books. I do want to give the author credit for writing decently enough and providing an ending that isn't quite as happy as what most people would expect in a romance. Honestly, I was gearing up for something infuriatingly sappy - but the ending that the author chose...it fit.

The problem is, the heroine in this book is completely unsympathetic. It's hard to root for someone who just wants to sit and cry and whine about how things don't go her way. Also, the magic angle, when it came into play, seemed out of place and silly because it just came out of nowhere.

I don't think I liked this book.