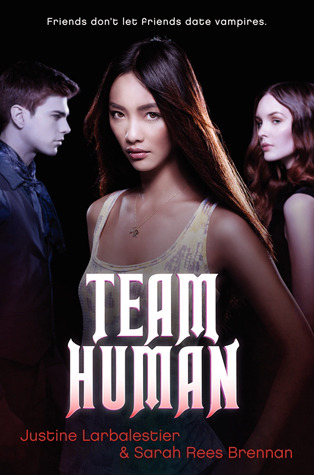 Remember when TWILIGHT was the Big Thing in publishing and teen paranormal romance was coming out by the dozen? Dragons, mermaids, ghosts, faeries, werewolves - oh my. If it existed, it was fair game, and would be turned into a romance.

TEAM HUMAN was a reaction to all that nonsense, and at the time many of my friends were calling it a breath of fresh air. Even though TEAM HUMAN is a teen paranormal romance, it's also a parody - of TWILIGHT, but also other books in the genre, too. I've read Harvard Lampoon's NIGHTLIGHT, which had its funny moments, but it was also very self-aware in the sense that it was a parody first and foremost but wouldn't have been able to stand on its own as a novel independently of the work it was parodying.

TEAM HUMAN can, and does.

Our main character, Mel, who narrates the story, is a seventeen-year-old high school student in a world (Maine) where vampires exist and everyone knows about it. Considering what other kinds of sh*t go down in Maine, thanks to Stevie King, this is not a surprise. Anyway, Mel has three friends - Ty, Anna, and Cathy. All of them have varying opinions about vampires. Ty is related to one, so he's neutral. Anna's father ran off with one, so she's pissed. And Cathy - Cathy is obsessed, & immediately falls head over heels for the first vampire she sees on sight.

I really like how TEAM HUMAN explored the deeper issues of what it means to be human, and the risks that would accompany turning into a vampire. This was something that TWILIGHT didn't really do all that well. For most readers, I think that there was never any doubt that Bella wouldn't become a vampire eventually, and since she didn't have any doubts either, we don't hear much about the risks. It's been a while since I read the books (TEAM HUMAN actually made me want to reread them), but I recall Bella's primary worry being that she wouldn't be able to enjoy her physical relationship with Edward as intensely if she were a vampire instead of a human & that he might not like her as much. TEAM HUMAN really goes into the risks, and I liked that there were several precautions in place to ensure that humans didn't change on a whim and that they fully understood the momentousness of their decision. The age limit made sense too. I think we all remember that creepy child vampire in INTERVIEW WITH THE VAMPIRE. That was no good. No good at all.

Mel is an interesting character. At first I liked her, but my like of Mel waned as the narrative went on & she did some things I couldn't really get on board with. She is very outspoken and has clear opinions, which is nice. She also takes action, and is active, rather than reactive. She kind of reminds me of one of Meg Cabot's 90s female characters - she even has the same tendency to resort to physical violence (something that I didn't really like, especially since no one calls her on it).

What made me like her a little less was how much of a jerk she was about vampires. Mel hates vampires. Someone on Goodreads who I follow said that if you replaced the word "vampire" with another noun, Mel could easily sound very racist. People do call her on this, but she never really "gets" why everyone is telling her that she's a vampire-hater. She doesn't hate vampires, she just doesn't want them anywhere near her, and doesn't think any of her friends should date them/become them. That becomes a classic refrain when Cathy announces her intent to become a vampire and Mel launches a "Team Human" campaign, doing everything she possibly can from begging, pleading, lecturing, and even exposing Cathy to views of decayed corpses of people who did not turn into vampires successfully, all in an attempt to sway Cathy's mind. She claims that the choice is being forced upon her by Francis, the vampire she claims to be in love with.

What makes this super hypocritical on Mel's part is that she later falls for this guy who is human but wants to become a vampire, and Mel is not having that. She insults his vampire family - on purpose or accidentally through what would probably be called "microaggressions" - tells him that she won't date him anymore if he becomes a vampire, tells Cathy that she can't be friends with her if she becomes a vampire, and basically harangues them both constantly about the risks and the consequences and, most importantly of all - how vampires can't laugh! THE HORROR!

Honestly, from the way Mel talks about laughing and smiling, you'd think not having a sense of humor would be worse than becoming a rotting corpse.

At the end of the book, Mel does realize the error of her ways - SORT OF - and eventually accepts her friends' choices. Sort of. I think it was a really good allegory for examples of bigotry that happen today, but I also believe that this is part of the reason the rating for this book is relatively low. Mel can be a very unpleasant, judgmental person, and while these flaws make her realistic, they can also make her head an unfun place to be chilling out while the story unfolds.

And it is a good story. The writing is good, all of the supporting characters are good, the kids all have families that love them and whine about not having enough money and other kid things, the world building was fairly well fleshed-out and the parody of TWILIGHT was subtle but hilarious. At one point, heartbroken Cathy says something like, "I haven't written in my diary forever!" I also liked how the vampires' old age makes them relics from bygone periods of time. Francis hates cars and keeps making these semi-racist statements because of the historical context he was born in. Unlike Edward, you really do get the feeling that Francis was born in another time and mystified by it.

Time to dig out my tattered old copy of TWILIGHT for a reread, methinks!