The Plantagenet Prelude by Jean Plaidy 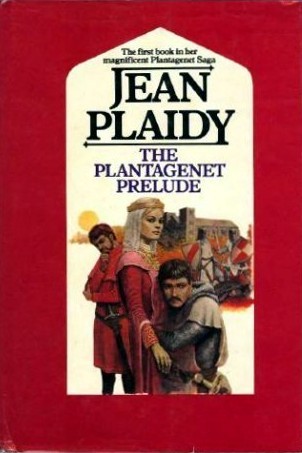 This is the fourth or fifth book I've read about Eleanor of Aquitane. To be honest, I've lost count. Eleanor is a favorite historical figure of mine, right up there with Cleopatra VII, Elizabeth Tudor, and Lucrezia Borgia. They are all card-carrying members of the bad ass ladies club: women who were born before their time, whose ambitions and sexual exploits created scandal and admiration and awe in equal parts.

My first book about Eleanor was back in middle school, and was called A PROUD TASTE FOR SCARLET AND MINIVER. My most recent was CAPTIVE QUEEN by Alison Weir. The former is my favorite, the latter, my least favorite. This work, THE PLANTAGENET PRELUDE, falls between the two, although it is much closer to PROUD than it is to CAPTIVE.

That isn't much of a surprise, though, considering Jean Plaidy is another pseudonym of the woman behind the popular Victoria Holt gothic novels. Even though Holt's novels are hit or miss with me, I do enjoy her sensationalism and her penchant for drama and twisted plots. Since Eleanor's story is full of sensationalism, and her and her husbands' political chess games could be quite twisted, it seemed like there was a potential for a good match.

If you're new to Eleanor's story, she's the daughter of the Duke of Aquitaine. A powerful little region of France (because of its geographical location, I think, although IIRC, it was fairly wealthy too). She ends up wedded to the son of the King of France, Louis. He's as subservient as Eleanor is headstrong, and for a while, she digs being admired. But Louis was a second son destined for the church, who only rose to power after his elder brother was killed. And you know what they say - you can take the boy out of the church, but you can't take the church out of the boy. It isn't long before Louis's religious fervor and fondness for crusades really starts to boil Eleanor's broccoli.

Enter Henry II. Even though he's ten years younger than Eleanor, there's an instant attraction. Eleanor contrives to get divorced from Louis on account that they're cousins, and creates scandal by marrying Henry immediately after. All is well and good, although Henry has a temper and doesn't see the need to be faithful.

Things get even thornier when Thomas Becket enters the picture. He was introduced to Henry with an agenda (supporters of the church want Henry to stop fighting the church), and becomes the king's chancellor and most trusted friend. But he is noble and is just as devoted to the church as Louis, in his way, and that creates a rift that becomes positively calamitous when Henry appoints Thomas as the archbishop hoping to gain control of the church through his friend, only to have Thomas thwart him at every opportunity declaring that his loyalty is first and foremost to God.

THE PLANTAGENET PRELUDE was published in the 1970s and it shows. I had a lovely older copy, with those thick pages that smell powdery and sweet. It was clearly done on a typewriter. The writing can be dense, and the narrative tends to be repetitive when it comes to descriptions, with the author recycling various words and phrases over and over, sometimes mere pages apart. There's also a lot of "tell" and not "show", with the author basically listing out everything that happens, interspersed with the occasional bit of dialogue to keep things interesting.

I liked THE PLANTAGENET PRELUDE, though. I think it's one of Holt's better works, and she does the story of Eleanor and Henry justice, ending on just the right note. She takes the "Henry is an a-hole" route that Alison Weir did, but in my opinion she does it better. Even when Eleanor is being ill-used by Henry, you never get the sense that she's a victim. Plaidy/Holt writes Eleanor as I've always loved to imagine her: a strong-willed, terrifying woman who isn't here for your games.