The Bride by Julie Garwood 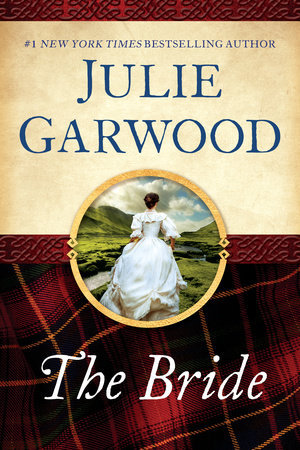 It's always nerve-wracking to read a romance that's considered by many to be a "classic" and is beloved by many - especially when you're an individual whose literary tastes often go against the grain. But THE BRIDE went on sale for Kindle and I bought it, and then it was voted as our December book of the month in my romance book club, so it seemed like I was destined to read it.

I haven't read a lot of Scottish romances. The only one I've read is the one everyone has read: OUTLANDER. I think I tried to read one by Maya Banks, but got bored and put it down. THE BRIDE is set in 12th century England and Scotland, so it's a Medieval romance. Some of my feminist friends are probably edging away slowly, because Medieval Romance can often be synonymous with Rapey Romance. Don't be alarmed. THE BRIDE actually makes an attempt to be somewhat forward thinking, to the point where parts of the book come across as downright anachronistic.

The premise is this: Jamie is the stepdaughter of a prominent Englishman who also has several other daughters (all his own). She does all the cooking and cleaning and is basically a glorified maid to her father and her sisters, but since they aren't awful to her and these expectations have been imbued in her since birth, she takes this as the status quo and they have a semblance of affection.

One day, the daughters find out that their father has agreed to marry one of his daughters off to a Scottish laird, which would be horrific enough in its own right - a Scotsman, the horror! [insert Scottish stereotypes here] - but also, this particular Scotsman has been rumored to have killed his previous wife. In an attempt to console them, their father tells them that it was probably just an ordinary run-of-the-mill beating that just got out of hand. No, I'm not kidding.

And the poor, deluded fool is puzzled as to why his reassurances are ineffective.

Due to trickery from her well-meaning stableman, Beak, Jamie ends up being the one to catch the laird's eye. What is this laird like? He's the typical alpha-with-the-heart-of-gold that was so popular in the 90s. He's strong, and well-endowed, with a nice set of abs. He doesn't take no for an answer, but only when he knows that that "no" is a yes in disguise. He throws men around like they're javelins, basically, and kills at the drop of a hat. But he also melts at the sight of children and lets his love interest get away with murder (when he's not condescendingly smirking at her ineptitude).

BUT, the most important thing you need to know about him is this:

Speaking of Kim Kardashian in the Medieval Ages, this book is chock full of anachronisms. Garwood would have you believe that Jamie was the inventor of the rocking chair, something that wasn't believed to be invented until the 1700s. She also uses the word "bedlam" to describe chaos, when the Priory that later become Bethlem (or "Bedlam") Royal Hospital wouldn't even be built for over 200 years. The dialogue itself also feels painfully modern. I kept thinking that this book was set in the 18th century, and half-expected them to be wielding guns instead of swords.

In the book's defense, the romance is decent. There's a half-hearted murder plot that's similar to the ones Lisa Kleypas is so fond of. It doesn't really add much tension, but it isn't a complete curveball either. The heroine's banter with the hero, Lord Arse Knees, isn't bad, either. I laughed at some of their repartee, and the many countless ways the heroine found of thwarting him by twisting his own words against him. I was expecting to get more closure with her family, since it's drilled into us how ill-used she was, but that never happened. What does happen is, the murderer (whose identity I guessed from the beginning) is caught, and the heroine unites all the warring clans of Scotland.

This is a book you read for the lols, and maybe enjoy, but I'm afraid it is not good for much else.