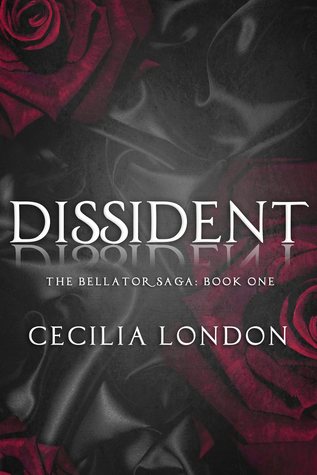 I'm still in the progress of the Kindle purge, and DISSIDENT is another "grab it while it's free" find from the Kindle Store. I snagged this one because I liked the title and the cover, which had a mysterious, Gothic feel. It's not a Gothic book, though. In fact, DISSIDENT totally surprised me, which is rare.

You could call it a contemporary romance, but it's set in an unstable political climate where California has already seceded and Texas is about to follow suit (why isn't really explained). In the prologue, we see the hero and heroine running for their lives. The rest of the story is a flashback to how they met, until the very end, that is, when the plot comes back full circle.

Caroline is a Democrat with a lot of bipartisan influence. She's also just recently lost her husband, so all her friends tiptoe around her. Especially since she lost a lot of her sweetness during her grief, lashing out at just about anyone without reason.

One of the people who was a victim of this lashing out is the very Republican Jack, whom she referred to as a "playboy millionaire" while he was campaigning. Now that she's come to terms with her husband's death, she wants to set things straight and attempts to apologize him at a party. At first, he reacts with anger, but then he finds out that she's the agent who got a bigwig Republican candidate to endorse him, and after talking to her realizes that she's not at all what he expected - and they end up becoming friends.

It was weird reading a book about politics when, like so many other U.S. citizens I've been making a pointed effort to avoid reading or even looking at any political-related news when possible, but London did a really great job. The banter between the two characters was witty and intellectual. Both of them are well read and actually talk about things that I imagine politicians would talk about in their downtime. I sneaked a look at the author's Goodreads shelves because I'm a creep like that, and it seems like she really made an effort to research this book, which really impressed me a lot.

The romance is also well done. They start out as friends, and Caroline is reluctant to advance the relationship because of her feelings for her husband. Eventually, they start to become more, and I liked how open the communication was between them. The sex scenes are also good. There's probably more than some people would like, but fewer than the erotica fans would want. She's fairly detailed about the foreplay but most of the actual sex fades to black. The characters use condoms and there's no cheating, although at one point the hero lets it slip that he's probably slept with 500 women over the last 200 years. He's a bit snotty about it, too, calling them "salad girls", "vacuous", and talking about how they were shallow and only interested in his money. On the other hand, he also admits to using women and taking advantage of his wealthy lifestyle, and expresses a lot of chagrin about his conduct - and he never says anything overtly sexist, beyond the cliche, obligatory "you're not like other women" statements. I did like that Caroline called him on his sexist BS, though.

And Caroline is such a great character. She has two daughters, who are great characters. She has friends. She has hobbies. She has a job. It was so refreshing to read about a heroine who actually has a life outside the hero - and she's a feminist, too! Excuse me while I swoon.

My biggest qualm with the book, apart from the "I've slept with 500 women" issue, is that the plot does start to rush towards the end. It was particularly noticeable about thirty pages before the end, when the relationship reaches a particularly emotional and tense point. "How is the author going to fix this before the book cuts off?" I wondered. And the answer is, she didn't. One moment, tension, the next moment, Oh, hey, guess what readers? Everything resolved itself! Cue epilogue and helpful ads for the next couple books in the series. Subtle. Very subtle.

At least she didn't end mid-paragraph, like I was afraid she would. The ending actually makes sense.

I liked DISSIDENT, and it's been the first of my "year of poor decisions" freebie grabs that I've actually really liked so far. It's intelligent, it's suspenseful, and features a cast of well developed characters who actually act like human beings and not two-dimensional cardboard cutouts. If you're looking for something original and intelligent and interesting, with some good one liners and well-written sex, you should absolutely give DISSIDENT a try. Just, you know, mind the cliffhanger.

P.S. My Jack and Caroline are Stephen Ritts and Lauren Graham. ;)