Scandal in Spring by Lisa Kleypas 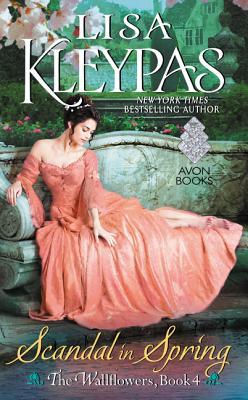 I'm slowly working my way through the Wallflowers series, and I have to say, this is Lisa Kleypas at her most charming. Nothing can surpass my love for The Gamblers duology, of course, but Wallflowers comes pretty darn close. It's about three sisters, and their friend, all of whom are considered wallflowers and bluestockings, and completely undesirable as wives...

Daisy Bowman is the last Wallflower, and really feeling that "forever alone" vibe now that all of her sisters and friends are married. Her expectations for what she wants in a husband are unrealistic, though, fueled by the fictional ideals in the romances she's so fond of reading, and her father has lost patience with waiting for Daisy to pair off with someone and taken matters into his owns hands. She's to marry his protege, Matthew Swift, unless Daisy can marry within two months.

At first, Daisy really annoyed me. She's spoiled and selfish and spends most of the first half of the book whining to her sisters and her friends about how much she hates Matthew. She's also hurt, because her father and Matthew (albeit in a nicer way) both imply that she's a parasite, which she is, pretty much. All she does is lounge around and take advantage of the comforts her father's wealth affords her, and she doesn't even seem particularly grateful for it.

What saves the book is Matthew. I didn't really think any hero could be better in this series than St. Vincent (I have a thing for evil rakes, I guess), but Matthew is pretty much the perfect romantic hero. He's an uptight businessman with a dry sense of humor, and he subscribes to the "I've loved you for years" trope - I'm a sucker for pining heroes, especially when they have a way with words.

Matthew actually makes Daisy into a better person, I think, because he indulges her whimsical side, while also calling her on her crap when she behaves boorishly. And she made him a better person, too, by forcing him to be less tense and making him feel loved. His backstory looms over most of the story, and I actually thought it made sense. Nothing too outlandish; it's entirely plausible.

Oh, and let's not even talk about the sex scenes. (Were the other Wallflower books this explicit? Matthew, you animal!)

Daisy may not be my favorite type of heroine, but Matthew is exactly my kind of hero.