I Love My Computer Because My Friends Live in It: Stories from an Online Life by Jess Kimball Leslie 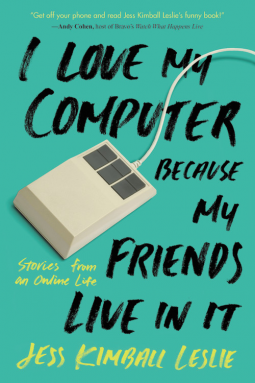 Are you a 90s kid? Do you remember what the internet looked like it its early days? Did you have an awkward Myspace?

I LOVE MY COMPUTER grabbed my attention because of that bright pink cover and that amazing title. "I love my computer because my friends live in it." Preach it, my fellow internet-aficionado! Anyone with an active social media presence these days can totally relate to having a friend circle that extends far, far away - especially if they're a teeny bit awkward and quirky.

This memoir is separated into several portions. The 1980s-90s describes the author's childhood, her frustration at copying things to floppy disks, the lengthy download time of Windows 95, and her internet escapades on the early chat rooms of the 90s. Watch her explore the Bette Midler forums with other obsessed fans.

2000-2005 talks about the author's adolescence and her experience with many popular websites in their early days. Oh, and by the way, she includes pictures that will have you smiling with nostalgia, remembering your own self-imposed frenzy at who to place in your top 8 and how to play songs on Winamp. She also talks about her years working as a Devil Wears Prada-esque personal assistant for a publishing firm & her years of living like a socialite on the dollar of some wealthy friends she met online. Remember the Blackberry? Oh yeah, you remember.

2005-2010 takes place in the author's later life, and talks about how she met her wife on match.com and how she adopted a puppy that makes sounds like a microwave from petfinder. This is a cute section. Her puppy-related shenanigans are pretty hilarious (and again - there's pics! yaaass), and I also liked how she wrote about adjusting to the stepmom life, too. It cracked me up how she ran to Facebook every time there was an issue and begged others for advice/support.

2015+ is kind of a retrospective, where the author makes closing statements and manages to get in a few digs at startup culture. She also talks about how weird it is that technology allows you to stalk the people you knew when you were young and find out uncomfortable amounts of information. I agree with that. It's shocking sometimes, what people are perfectly willing to share with strangers.

I LOVE MY COMPUTER is definitely written for that gap of people that fall within Gen Y and Millennial. People who were too young to fully experience the 90s as a preteen or teenager, but who are old enough that they're often befuddled at some of the behaviors of their younger peers (like anything Instagram or Snapchat related, for example). This is the song of your generation!

It actually kind of reminds me of Felicia Day's memoir in some ways, because both are written by geeky women with unusual interests who took advantage of the internet before it hit mainstream and watched it grow and evolve along with pop culture. I felt really nostalgic while reading about Windows 95 & seeing some of the screenshots she included of websites in their early days. I kept laughing and smiling, because her observations are either totally left field or totally on point. Either way, it's pretty darn endearing!