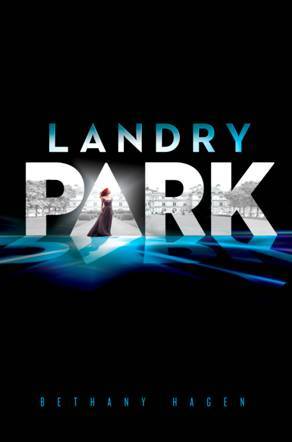 I keep coming back to young adult novels. No matter how many times I tell myself, "This is the last straw, I'm done", I get seduced back into the world of costume dystopians, angsty vampires, and mean girl cliques. When the YA authors get it right, they get it right. THE WINNER'S CIRCLE, GLITTER - I went into both of those books expecting more of the same - a passive heroine who spends all her time mooning over the love interest, only to find myself in the midst of a well-developed world with complex characters and heroines who are more gray than black or white.

LANDRY PARK could be the same way, I thought to myself. Promising to be another rich girl caught in moral turmoil in a world on the verge of change, LANDRY PARK might also be more than it seemed.

First off, the blurb claims that this book is a cross between THE SELECTION and Downton Abbey. This is another case of inadequate comparisons, in my opinion. LANDRY PARK is more like a cross between GLITTER and MATCHED. Future United States has been annexed in part by China. The rich people, the Gentry, rule everything, and poor people - the Rootless - are basically their slaves. They skip around in period costumes because...they can, I guess...and have debutante balls where they display their wealth in disgustingly lavish displays. For some reason, everyone has switched to nuclear power, with nuclear lanterns being the light source of choice. Radiation poisoning? Cancer? Let the poor deal with it - and make sure to have the strongest men doing the most dangerous jobs so they die instead of revolting.*

Madeline Landry is heir to the Landry fortune, and as much as she wants to go away to college and pursue her dreams, her parents are keeping her chained to the estate, hoping that she'll marry and then have heirs in order to secure the family legacy...which is orchards, I think. Produce. She's like a Disney Princess, though - Princess of Future Safeway: she wants more. I liked this at first; it's always refreshing to see a girl who doesn't want to be bent to society's rules and conventions.

But the Princess of Future Safeway ends up meeting a boy named David Dana. She falls for him instantly, but he seems to have feelings for her best frenemy forever, Cara. After this, LANDRY PARK becomes more of a soap opera than a dystopian. Does David string Madeline along without explaining to her what his intentions are? Of course. Does QoFS have another love interest that she uses to make David jealous? Of course. Does her BFF have another love interest that she uses for...whatever reason? Possibly. This is the cat's cradle of romantic liaisons, you know.

LANDRY PARK had passages of beautiful writing, and the world building wasn't bad. I also did appreciate how the characters were more complex than they first seemed, and that the author made an attempt at making the story more than just a romance. I would have loved to read a book that was geared towards young women that actually did do a decent job at talking about class and exploitation and inequality, but LANDRY PARK was not that book for me. GLITTER, which I'd read before, did that so much better, and featured a protagonist who was much more compelling and complex, so it's possible that part of my lack of interest with this book stemmed from reading a similar but much better book beforehand. I wish that LANDRY PARK had been better explained. There isn't a lot of history about this world, and I don't understand how many of these things - the "Eastern" takeover, the rigid class-based striations, the mysterious "war" - came to pass, or why they're relevant, nor do I understand why nuclear power is now the thing instead of electric, solar, or fusion.

I also can't really forgive David for being such a prat. He was really emotionally manipulative, and I didn't see what Madeline saw in him. He flaunted his relationship with this other girl - her friend! - in her face, and basically expected her to come at his beck and call anyway. Which she did! I'm sorry, but when a character seems to have no self-respect, how can I, the reader, possibly be expected to respect her? This is a book for teen girls! What does this say? That it's okay when a guy cheats on you, he has his reasons? I couldn't even feel sorry for her, because she was selfish, too. And while a selfish heroine can be interesting, Madeline wasn't. All she thought about was boys, and she never would have done the things she did if boys - and her own interests - hadn't brought her there.