I Love My Love by Reyna Mays 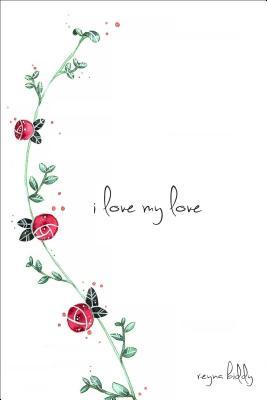 I think we were all surprised when I gave THE PRINCESS SAVES HERSELF IN THIS ONE a positive review. As much as we all sneer at "Tumblr poetry", there's a spare rawness to it that can be oddly compelling. Even if I still have doubts as to whether this is really "poetry", I can appreciate wanting to share your voice and be heard. Who knows? I thought. Maybe this is a thing. Maybe I like this thing. This could be a favorite thing. Cocky with my success, I virtually strolled to Netgalley and applied for #AllThePoetry and ended up with I LOVE MY LOVE...which I soon realized after a few pages that I wasn't going to like.

This came as a major shock, because Andrews McMeel so rarely fails me. I LOVE MY LOVE also does something that PRINCESS does not - it talks about deeper issues, with a seductive but powerful anger that all but sparks from the pages. This is a voice that doesn't ask to be heard so much as demands it, with a force that is downright impressive in its intensity.

The problem is that I didn't care for the style of the poetry, which is a problem, because of how integral style is to the construction of the entire poem - it's the framework in which the ideas and themes of the poems themselves are organized. Even if you like the ideas and themes, an incompatible style pretty much throws all that out the window.

Mays does what Lovelace does in her book, which basically means no traditional capitalization and lots of line breaks to separate what would otherwise be ordinary sentences. Some of Mays's poems do rhyme, and they rhyme in a way that made me wonder if they might actually sound better being read aloud, like one of those old-fashioned beat poets, instead of being read on the page. Because the way I was reading them in my head, the meter was not consistent and many of the rhymes felt forced.

A lot of her "poems" are also paragraphs, and it's hard to read them because of the lack of capitalization. Some have criticized Lovelace for the amount of white space in her poems, but it does make them easier to read. This was more of a strain, and not really worth the effort. I also took issue with the fact that her ellipses only had two periods instead of three. This stylistic choice looks like a typo, and I kept stumbling over it because it looked like an error, even though it wasn't.

I feel bad giving this a low rating, because there are some important topics in here, and some of the lines have so much potential. This was someone trying to tell their story, and trying to tell it in a way that would resonate with others. I'm sure it will - with others - but not with me. Don't let that discourage you from reading this if you're interested, though - especially if you really, really liked THE PRINCESS SAVES HERSELF IN THIS ONE. :)

Thanks to Andrews McMeel and Netgalley for the advanced reader copy!