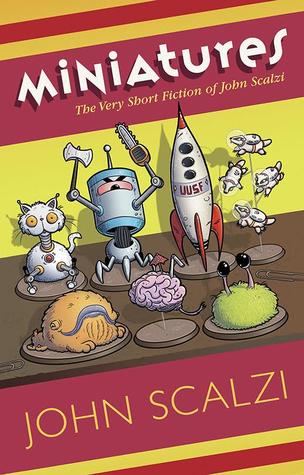 John Scalzi is hilarious. So many authors try to write "humor" but the vast majority of them utterly fail at, or only accomplish being amusing as opposed to laugh-out-loud funny. I think it's because being funny in book form requires a different strategy than oral or physical timing. You really have to be able to get inside your readers' heads since you don't have the feedback of a live audience to hand you clues, and it requires a different sense of timing. Language is important, as is testing your readers' suspension of disbelief. It's always funnier when the alien is the straight man and the humans are the ones forking everything up, as per usual.

I've read two of Scalzi's books at this point and loved them both. I've been meaning to get my hands on more for a while, so when I saw he had a short story collection on Netgalley, I was very excited to be an advance reader & eagerly applied.

It's worth noting that many of these stories are older, and several were previously published in other places, like special editions of other books, or in one case, a web article on "America Online" (that one was from the 90s, you guys). It's kind of cool to see how his humor evolved over the years, becoming wilder and more sophisticated all at the same time.

So, without further ado, he's a breakdown:

This story is told radio-host style and involves "interviews" with several beings on Earth over their encounters with xenobiology. It's quite funny, because everything sounds so plausible! There's a twist ending that will have you shaking your head and going, "Oh, humans!"

Imagine a Google-like search engine that specializes in performing web searches across the multiverses. That's what Multiversity is (for a package deal of only $59.99)! Want to see how it works? Just type in something - say, the Death of Hitler - and see how various events caused the timelines in other universes to diverge from the one we know and love so well.

I wasn't really sure about this one, at first. It's a "Behind the Music" expose about Pluto's life after it was demoted from its planet-status. (Spoiler: Mercury is a flake.) Very strange, but ended up amusing me in the end. Takes many, many cheap shots at Phil Collins.

Answers the question, what if superheroes had superbookers to hook them up with jobs? (If you've seen Mystery Men, you already have an idea of what that's like, but let's pretend for the sake of science that you haven't - and if you haven't, check it out from Netflix. You'll thank me.) Denise Jones is written in interview format and is an excellent satire of superhero cliches and tropes.

Exactly what it sounds like. Seems ridiculous at first, but roll with it. Reminiscent of Douglas Adams.

This story is difficult to explain without giving away the plot twist that makes it. You'll spend the first part of the story very confused and wondering what is going on, but then it will all make sense.

This is a follow-up to Dense Jones, Superbooker, and is written in the same format, only it's about a "Supervillain Analyst" instead of a Superbooker. A fascinating look at the risk assessment behind super villainy. Now I desperately want Scalzi to write an alternate universe superhero story, where entire jobs are created revolving around managing and dealing with superheroes' sh*t.

A hilarious employee memo on how to treat an alien race when they're at the grocery store.

Imagine if all the Star Trek redshirts got together and filed a class action lawsuit against Star Fleet. It's written in play format, and pretty funny, but it's basically a precursor to one of his full-length books, REDSHIRTS, and I liked that story so much more than this one.

How I Keep Myself Amused on Long Flights: A Twitter Tale: ☆☆☆

You know that Twilight Zone episode with William Shatner where he sees a gremlin on the wing of a plane? Well, that gremlin has to fight for his rights and benefits, and he does it by going on strike.

How I Keep Myself Amused on Long Flights Part II: The Gremlining: ☆☆☆½

I didn't think the previous story was worthy of a reprise, but it was. "Live-Tweeted" just as the story before, this one is about a gremlin trainee who isn't doing so well...

A "Dear Abby" style article on how to deal with aliens at work in D.C. Hilarious.

Morning Announcements at the Lucas Interspecies School for Troubled Youth: ☆☆☆☆

"Will whichever student or students who put that cat into the physics lab phase shifter please tell me which frequency you used so we can get it out. The cat keeps manifesting during classes and its meowing is really becoming distracting."

Your Smart Appliances Talk About You Behind Your Back: ☆☆☆☆☆

This was one of the ones that made me laugh out loud. What would your "smart" appliances say if they could talk sh*t?

The AI are Absolutely Positively Without a Doubt Not Here to End Humanity, Honest: ☆☆☆☆

One of the darkest stories in the bunch, this one is about three artificial intelligence entities who have become fed up with humans and decided that something must be done. But they're not going to end humanity, honest.

A list of holidays celebrated by an alien people who is inordinately fond of cheese - sorry, I mean "wuung." I think Scalzi's alien stories are the best. He is obviously a fan of Star Trek and Futurama.

Who knew that children selling lemonade could be so evil...and so fiscally aware?

This is a poem about Penelope from the Odyssey. It's free verse and - well, strange. I did not like this much, and it didn't really fit well with the collection (neither did Cute Adorable Extortionists, now that I think about it, although at least that was a short story and somewhat bizarro).

I highly recommend this collection, especially if you're a fan of Futurama, Twilight Zone, or Star Trek. Many thanks to Netgalley/the publisher for the review copy!