The Memory of After by Lenore Appelhans 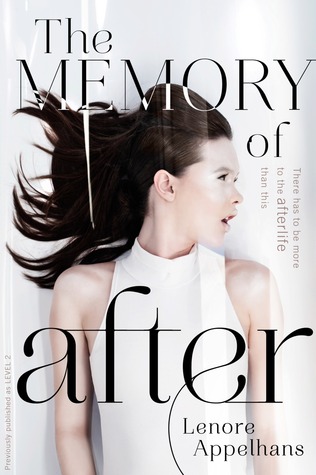 Can we take a moment for some cover snark? What is going on with that girl's makeup? She looks like she was trying to attempt the full face highlighter challenge and gave up halfway. I liked the original title/cover better, but I'm wondering if it was changed because having the number 2 in the title made too many people think it was a sequel to the book they didn't have. This new cover just doesn't make sense, but in a way, it fits the book perfectly because of that: this book doesn't make sense, either.

By the time I've gotten about 20 pages into a book, I usually have a pretty good idea what I'm going to rate it. THE MEMORY OF AFTER was the 1 time out of 100 that this doesn't happen. Why? Because it's a strange book. Not necessarily strange in a bad way, just...strange. It's like the author had several different story ideas and decided to utilize them all by smooshing them together.

Felicia (resist the urge to make the obvious "bye Felicia" joke) is dead. She "lives" out her days in a strange white room, replaying her memories over and over. The afterlife is basically like "YouTube": you can upload your memories, tag them, rate them, and when people watch them you can get credits, which you can then exchange to watch other people's memories instead.

Felicia's parents were both foreign diplomats, so her memories are quite popular because she has so many memories of traveling. Her favorite memories, however, are of the boy she was dating while alive: Neil, an active participant in a youth group and a member of the church choir. Felicia likes him so much that she ends up joining the church because of him, but as pleasant as these memories are, they are still hard for Felicia to watch because Neil is connected to her death.

Felicia's YouTube purgatory days are disrupted when the memory screens start malfunctioning and showing things that they shouldn't. Shortly after that, a strange boy appears named Julian, who looks oddly familiar. It turns out he's in her memories too, and part of a resistance group whose goal is to break key members out of YouPurgatory because it's being mismanaged purposely...for war.

This is why the book is so strange: 1/3 of it is a "dead girl trying to move on" storyline, 1/3 of it is doomed teenage romance with love quadrangle, and 1/3 of it is HUNGER GAMES-esque plot of resistance fighters trying to overthrow their dystopian overlords. It's like someone said to themselves, "Hey, the Matrix was a great story, but let's replace the robots with angels, and throw in BEFORE I FALL and THE HUNGER GAMES for laughs! It'll totally make sense!"

The religion angle was also odd. There's talk about commitment ceremonies, reenactments of passages for the bible, True Love Waits is name-dropped, and just all this other stuff. What really threw me for the loop was this blink-and-you'll-miss-it moment towards the end when Neil's cousin is getting married (I'm sorry, I mean commitment ceremonied) to someone - whose gender is never specified - and then Felicia refers to said cousin's "alternative lifestyle" that distanced her from the church community. I sat there for a moment, blinking in astonishment, because I could not believe it. Did I really just see the words "alternative lifestyle" being used - sincerely - to describe a gay couple?

In the end, I decided that this book was OK. The writing was good. The characters were tolerable. Neil has a mini-freakout when he thinks that Felicia might not be a virgin, but apart from that he's totally forgettable. I thought Autumn and Felicia were equal twits. Autumn is that stereotypical self-centered airhead, but I didn't think that excused Felicia from cheating with Autumn's boyfriend. At one point, they're actually making out in a taxi while Autumn is passed out beside them! And then they're shocked that they're caught!!! LOL! I can't with the stupidity. Felicia does feel bad about it, though, and I liked how you could see which of her actions were most troubling to her because they were the memories she replayed the least. I did actually like Julian, potential creep factor aside, probably because he reminded me of the Julian from L.J. Smith's Forbidden Game trilogy - and that ended up proving prophetic in some ways, which made me wonder if the author was inspired by the books. I really do have to give the author credit for coming up with something so OTT. It's a pastiche of various genres that don't quite fit together, but don't quite clash, either.