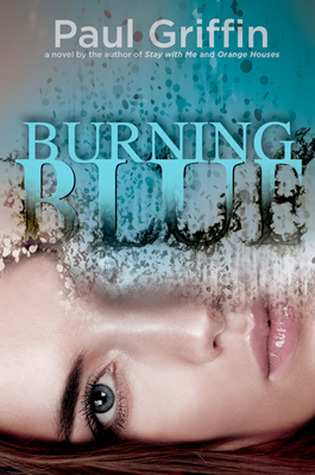 What horrors lurk in the hearts of teens?

Edgy teen suspense novels usually have me feeling pretty skeptical. There's a lot of suspension of disbelief required and at least once (but often more than once, often closer to 10+ times) I shake my head and think, "Shouldn't you leave that to the cops?" Nothing is more frustration than watching a teen obstruct justice and then be patted on the head at the end for their "good deeds."

BURNING BLUE does this, but the concept is horrifying enough that I had to finish the story to find out what happened. (Also, said cops actually call Detective Teen on the carpet for doing this and slap him with obstruction of justice charges, yay.) Nicole Castro, the pretty and popular queen of her high school, is the victim of an acid attack. Nobody knows who did it, and everyone is really nice to Nicole about it, but there's no doubt over how much the terrible incident has disrupted her life.

Jay Nazzaro is a teen hacker, who also has epilepsy. He's often teased and mocked because some jerk with a camera managed to record one of his worst fits on their phone & then posted it on social media for all to see. Poor guy. Because of this humiliation, Jay is in a better position than most to understand where Nicole is coming from. He becomes obsessed with her, determined to find out who attacked her & why, and help bring her to justice.

I thought that this was going to be one of those really creepy stories where the hero is written along the lines of "Big Alpha Is Watching." You know, his obsession would be psychotic in any other circumstances besides this one, but because he's doing it for the "right" reasons, it's okay? But Jay wasn't like that. He really does care about Nicole. He tries to anticipate her needs, even when those needs involve him giving her space, and he falls harder for her when he finds out what most of the school has already found out in one way or another: Nicole is a very nice, down-to-earth person, someone with a beautiful soul.

The mystery aspect of the story was pretty well done. I couldn't figure out who had done it, until the very end. When I found out who the person did it, and why, it made a horrific amount of sense. It's hard to guess, though, because the two of them live in a town filled with red herrings. Nearly everyone says some sinister, vaguely threatening, coincidentally relevant thing at one point or another. It's the mystery equivalent of a jump scare: "I DID IT! LOL JK."

BURNING BLUE is told through Jay's POV, emails from the perpetrator, and entries from Nicole's diary, so you never have the full side of the story. The only thing that didn't really fit 100% was Jay's hacking. I know some people can probably do this, but it felt like asking a lot to expect me to believe that this teenage guy can hack into government-level security with no formal training. Apart from that issue, though, this was a decent read. I finished it in under a day, if that counts for anything!