Maido: A Gaijin's Guide to Japanese Gestures and Culture by Christy Colon Hasegawa 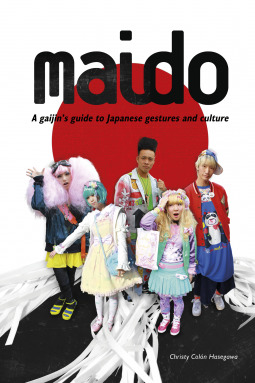 Like 95% of teenagers, I was obsessed with Japanese culture when I was a kid. Unlike 95% of teenagers, I was into anime and manga before it was cool, so I got tons of crap about it from classmates. ("Oooh, you still like Pokemans? Wasn't that popular in elementary school or something?" I hate to break it to you, classmate, but not every anime is Sailor Moon or Pokemans. And let me tell you, it's freaking hilarious to see people who spent their high school career poking fun at the anime fans hastily jumping aboard the latest Pokemon Go craze. I SEE YOU.)

Anyway, I saw MAIDO on Netgalley, and I was interested because you often see the characters in anime and manga posing and making various gestures which are supposed to have various meanings. I already knew about the peace sign thing that people do when they take pictures, and I'd seen "nani nani boo boo" (although I didn't know what it was called). I was curious about what some of the other gestures meant and looked like.

MAIDO is a surprisingly thorough guide, and while some of the gestures seemed to be more silly, many of them are quite useful. The guide also talks about whether the gestures have negative or offensive connotations, which I also thought was quite helpful. The best part of this book, though, is that each name (in romaji and kanji) is accompanied by a picture of a Japanese person decked out in street fashion performing the gesture themselves. I love fashion, so seeing the kogal and lolita fashions, among many others, was very, very cool. Fashion life goals, people!

One thing that surprised me was the "fakku yuu" gesture, which is, as you might have guessed, an upraised middle finger. What makes it even more disturbing is that the people making this gesture are two very young Japanese girls. Children. But apparently the meaning of this gesture was lost in translation, so people go around flipping the bird to people in Japan without it being quite as vulgar/rude as it is here. I remember reading one of those magical girl manga and being quite shocked, because the heroine was in middle school - and she gave the middle finger to this one guy! It really makes you wonder how many of our gestures are vulgar in other countries (and they are, there's no question about that - take the "A-OK" sign or the "got your nose" sign).

MAIDO would be a great gift for some who reads a lot of manga or wants to/is planning on going on a trip to Japan. The pictures alone would make it worthwhile, but the sly, cheeky descriptions and useful catalogue of gestures make it more useful than your average novelty book.