Claiming the Duchess by Sherry Thomas 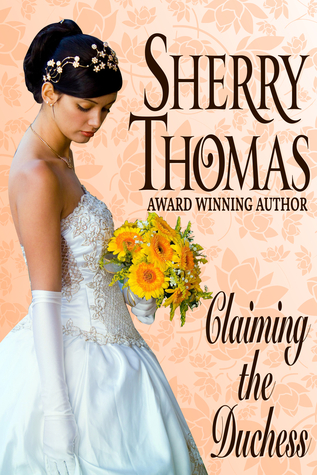 When I first got my Kindle, I became a little *too* enthusiastic. In what I call "the year of poor decisions," I eagerly acquired nearly every free romance from the Kindle Store that looked halfway interesting for about a year. Now I have hundreds of books on my Kindle, and my app is mad at me. It's time for some spring cleaning.

**SPOILERY SPOILERS - READ AT OWN RISK***

CLAIMING THE DUCHESS is a short story I downloaded because it was free, and because I recognized the author. Sherry Thomas writes some excellent regency and Victorian stories - THE HIDDEN BLADE is an epic story involving ninjas and scheming families, and DELICIOUS is a retelling of Cinderella involving mistaken identity and a bit of magic realism.

CLAIMING THE DUCHESS starts out promisingly enough. Clarissa is the much younger, second wife of a Duke. The Duke isn't evil, he's just indifferent, mean to their stepson, and cheats on her with other women. So basically, an a-hole.

One day, the Duke has a dinner and proceeds to insult someone in their acquaintance that Clarissa likes. She leaps to said person's defense, only to be mocked by the Duke as his sycophants haw-haw it off - all of them except the mysterious Mr. Kingston, who offers to sit by said person at dinner.

Shortly after the dinner, Clarissa takes up correspondence with one of their neighbors, a miss Julia, who always signs off her letters JMK. Julia becomes her confidant over the next two years, giving her advice, listening to her dreams, and exchanging all manners of presents. In case you haven't guessed it by now, Julia is actually Mr. Kingston writing to Clarissa under a false name.

I get that short stories are difficult, so it's hard to initiate and resolve conflict within such short parameters. Courtney Milan is the only romance author I can name offhand who appears to have mastered the art of the short story. CLAIMING THE DUCHESS has a great opening, with some good relationships (the relationship between Clarissa and her stepson, Christian, is especially heartwarming), but the conflict part of the story is done very, very badly.

I mean, I cannot swallow the fact that Clarissa would just say, "Oh, you've been lying for me for two years? That's perfectly all right. Yes, let's get married!" And he reveals this to her shortly after forcing himself on her at a party, while Clarissa is saying stop, stop. The only thing that actually does stop Kingston is Christian, who, after making sure Clarissa is all right, punches that rapist dudebro in the face. Clarissa feels bad, of course, and is like, no it's perfectly all right! I was only afraid Julia might see - which is when Kingston drops the bomb that it was him all along. That is not cute; that is very creepy. But no, the book ends on a merry little note with the two of them staying in bed for eight hours and then writing more of those adorable letters to one another about the upcoming honeymoon.

Christian is adorable, though. I love his charm and his fossil-collecting hobby. This book gets an extra half-star because of him. It'd be lovely if he has a book of his own!