Only With Your Loveby Lisa Kleypas 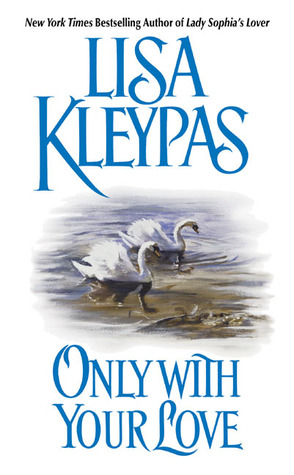 Lisa Kleypas is one of the most popular historical romance authors out there, and with good reason. Her Victorian and regency stories are charming, with strong heroines and to-die-for beta and alpha heroes. But what forgotten, moss-covered tales pave the beginning of her path to success? TO THE BACK LIST!

ONLY WITH YOUR LOVE is one of Kleypas's earlier stories. First published in 1992, it's one of those "new wave" bodice ripper tales that tried to be a little less politically incorrect and rapey than their absolutely over-the-top crazy-sauce-drenched predecessors.

The heroine of our tale is the virginal Celia, who is going to New Orleans by ship to marry her husband, Phillipe Vallerand, who has waited this long to consummate the marriage. When we see them, he's about to give up all patience with that - until he's summoned by one of the crew because of pirates! Phillipe runs off, giving Celia his goodbyes and a pistol. Why a pistol? To shoot herself if the pirates invade her chambers, of course, because honor is everything.

Well, the pirates invade her chamber, but Celia doesn't have the guts to shoot herself, so she shoots one of the pirates in the guts. She's overpowered, and as the pirates are manhandling her out, she sees that Phillipe has been shot.

Meanwhile, on Pirate Island*, Captain Griffin is chilling out with his crew, and side-eying their rivals, the Legares. The two groups don't like each other, but have reached an uneasy stalemate. Griffin decides to end that stalemate when he sees the prize Legare and his men have. Griffin decides to buy her, and Legare argues with him, and then when they eventually reach a price, Dominic Legare says Griffin can't have her until his brother Andre rapes and tortures her first. They agree to fight a duel to the death for Celia, and Griffin ends up fighting someone who Legare names as his second.

Anyway, pirate honor doesn't mean much because Legare immediately tries to renege. Griffin escapes, kills Andre, and abducts Celia. After threatening to rape her a few handfuls of times, he actually does it, and Celia curses her traitorous body for liking it, says how much she hates herself, etc. Then she finds out that Griffin is related to her husband in some way, although he won't say how, and that his real name is Justin. Griffin/Justin dumps Celia off with her husband's family in New Orleans where it's revealed that Justin is actually Philippe's black sheep twin brother.

For a while, nothing really happens. Celia is with the Vallerands and mopes a lot. Then they find Justin who is all stabbed up, heal him, and lie to the authorities, saying that Justin is actually Philippe, so he doesn't get arrested for his pirate crimes. Celia angsts about her feelings, driving the family (and me) mad. Legare shows up again, wanting revenge, and claims that Philippe is actually alive and being held hostage. Celia and Justin are kidnapped, Justin is tortured, Celia is almost raped but then rescued. Legare is murdered. Philippe was actually having an affair while he was engaged to Celia, and has slept with the woman again. They decide that they weren't actually meant for each other, so Philippe marries the OW and Justin marries Celia.

The beginning of this book was more like a traditional bodice ripper, with the pirate island and the duel to the death. I didn't even really have a problem with the forced seduction because that is something that a pirate would probably do, because they lack the morals of the societies that they pillage from. What bothered me was Celia's reaction to what happened, and the way their relationship went from there. She built up Justin as this noble man, who did what he wanted and was strong and brave, but he was a pirate who raped her when she was emotionally vulnerable and then mocked and taunted her about it afterwards. It was like that was completely forgotten once it was no longer relevant to the story. I get that this story is a product of a different times, when the typical romance formula was different, but this is a perfect example of why I do not tend to like bodice rippers in the 90s: early bodice rippers were brutal, and it was usually pretty clear that the hero was not a good guy. The 90s bodice rippers tried to soften this up, but actually ended up sending some pretty uncomfortably mixed signals, because here you have a hero who rapes, but he does it because he was just so impassioned and in love he couldn't help himself? Nope! I am not buying that! I'll take the 1970s bodice ripper heroes over the 1990s bodice ripper heroes any day. They were just as full of sh*t, if you pardon my language, but at least they didn't try to sell that sh*t as chocolates and roses.

Celia is also a very unpleasant heroine. All she does is cry and mope. I also felt like the narrative really went out of its way to make her seem helpless and small, as she does not eat her food but "nibbles" it instead, and is described as skinny and child-like (several times, she's described as looking like a young boy). I did think it was an interesting touch that Celia did not speak much English and that this proved to be a difficulty for her in her exchanges with others, as that is something that was probably a big issue back then with Google Translate not being a thing, but that, too, seemed like yet another detail meant to render her dependent and helpless. I just can't help but compare her to the heroines of the Gamblers series and the Wallflowers series and come up short.

I love Lisa Kleypas, and I enjoyed this glimpse into what her early writing looked like. She has really found her voice since then, and her writing is so much more polished now. In that sense, books like these are great, because they create a compelling before and after for one of my favorite authors. However, I did not like the story - I thought it changed tone too many times, and did not find the heroine at all likable. I think this story would have been better if it had been published twenty years before, with an antihero character who actually acted like a give-no-forks pirate instead of a garden-variety douche-flower.

*Pirate island exists, by the way, and it's a terrifying place.