Shades of Twilight by Linda Howard 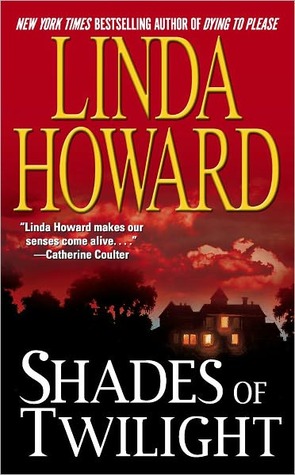 I love challenges, and that's why the mods and I at Unapologetic Romance Readers came up with the Halloween 2016 Reading Challenge. We're shining the light on the darker side of romance and seeing what horrible, creepy things come a-crawling out. I picked SHADES OF TWILIGHT to satisfy the "romance involving a murder" category, and boy, did it satisfy on that end.

SHADES OF TWILIGHT features Roanna Davenport, one of the heirs to a wealthy Alabama family. When her parents and aunt die in a tragic accident, both she and her cousin Jessie are left orphans, and forced to live at the intimidating Davencourt mansion with the stern family matriarch, Lucinda, for whom honor is everything.

Jessie is beautiful, cold, and cruel - and even though she always gets whatever she wants, she hates Roanna for some reason and isn't afraid to show it every chance she gets. Heaping on abuse, making nasty comments, showing petty slights; Jessie isn't above anything to put Roanna down. For some reason, the other family members tolerate - or even encourage - this emotional abuse. The only person in Roanna's corner is the handsome Webb, her second cousin who is seven years older than she is. Roanna has a huge crush on him, and she's upset that even though he shows her affection, he is attracted to Jessie like everyone else and plans to marry her.

When Roanna is seventeen, Davencourt is stuffed full of Davenports and Tallants. She can't do any right, and seeks refuge with her horses  - and with Webb, who is now married to Jessie. Roanna wants Webb more than ever and is secretly happy that their marriage is failing. Then, one day, she catches Jessie sleeping with a man who isn't her husband,  and later forces herself on Webb. Jessie catches them kissing and raises a scene that brings all the family members running. A major fight breaks out. And then, later that night, Jessie turns up dead. Death by fire poker. Natural causes, obviously. Just kidding, it's murder and everyone assumes Webb does it, which is why he skips town. Roanna doesn't lay eyes on him again for another ten years when her grandmother Lucinda employs her to seek him out and find him and bring him back to Davencourt to assume his role as rightful heir.

With its bad sex, family drama, and sexist hero themes, this is 90s cheese at its cheesiest and normally I spread that on crackers and snarf it down like there's no tomorrow, but I took a lot of issues with SHADES OF TWILIGHT and I just couldn't put them aside.

Problem #1: The incest. I don't know what it is about this week, you guys, but this is the third book I've picked up this week that had incest in it. I thought COVENANT WITH THE VAMPIRE couldn't be topped in grossness, but I was wrong. So, so wrong.

Problem #2: The characters. Everyone in this book actively takes their vitamin D-bag supplements; there isn't a single likable character to be found within these pages. If the person in question isn't an outright psycho or b*tch, they're an emotionally insensitive, self-centered puckerhole, with the sensitivity of a lead pipe. Even the characters I was supposed to like, like Webb and Roanna, annoyed me. Webb is one of those overbearing alpha cavemen who tell the heroine how and well to eat and get so caught up in their passions that they "accidentally" forget to wear condoms. Roanna was awful because she's the definition of a doormat. In fact, if you look hard, you can still sort of make out the faded "welcome" on her forehead. All she does is cry and mope. Her character flaws are that she sleepwalks and that she doesn't eat when she's upset - which is all the freaking time.

Problem #3: The way eating disorders are broached in this book. It's hinted that Roanna might have anorexia. At the very least, she has an emotional-related eating disorder, because whenever she's anxious, upset, or guilty, she doesn't eat. Her attitude toward food really made me uncomfortable in this book. We're constantly told how skinny Roanna is and not necessarily in a bad way - she's compared to dolls or called child-like. Webb marvels that seventeen year old Roanna seems to weigh the same amount as seven year old Roanna. At one point in the story she gets so upset that she stops eating entirely and goes down to 80lbs (at 5'7"), and nearly dies. She calls eating a "chore" several times, and the hero admires her narrow hips, small breasts, and flat stomach on several occasions. We're told, several times, exactly how much weight Roanna can stand to gain (15lbs). When Webb actually gets romantically involved with her (and even before then), he starts trying to control her diet. This felt so unnecessary to the storyline and yet was such an integral part of it, that it felt odd. I'm not against skinny women and I do think it's important to raise awareness of eating disorders in fiction, but the way it was presented in this book created a lot of uncomfortable mixed signals.

Problem #4: The way sex is broached in this book. It's the 90s. Romance novels then were a very different animal from the ones in today's market place. Men had mats of chest hair and women were always virginal. But the slut-shaming is strong in this one. It's very important that Webb compare the differences between Jessie and Roanna once he starts sleeping with Roanna. It's important that Roanna have "uncomplicated sensuality" (or something like that) and that she doesn't use sex for power or manipulation. At one point he marvels at her virginal virginity, saying that if she didn't go horseback riding, he probably wouldn't have even been able to get a finger in her. I'm sorry, but at what point did the female anatomy become tantamount to a Chinese fingertrap? Vaginas do not work that way. Here, I'm not even going to say anymore on this. I'm just going to direct you to this awesome movie done by Adam Connover called "The Truth About Hymens and Sex."

But as much as this book annoyed me, I didn't hate SHADES OF TWILIGHT. The first 100 pages were excellent and made me think that I had a 4-star read on my hand. The problem was that in her quest to make Roanna a sympathetic character, the author made her an utterly unlikable one, because she lacked any sort of goals or internal conflict apart from "But I want Webb to like me!" It's a shame because I really liked the setup and I'm usually a sucker for small-town intrigues like these. Take this book from Sandra Brown's backlist, SLOW HEAT IN HEAVEN. It follows a very similar formula, but the mystery is more engaging and the heroine is a little less...sad. When the hero and heroine butt heads in SLOW HEAT, it feels less like victimization and more like a fight between equals.

Email ThisBlogThis!Share to TwitterShare to FacebookShare to Pinterest
Labels: romance