Prince of Misery by Heather Crews 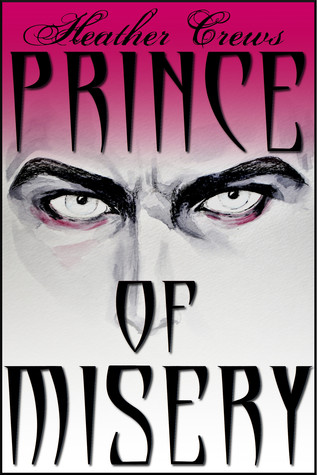 First, a disclaimer - Heather Crews is my friend, and one of my favorite people on Goodreads. As an additional caveat, she gave me an advanced copy of this years ago for review, and I'm only just now getting around to it. However, if you think that has any affect on my review of her work, you would be wrong. Friends have not been, and are still not, exempt from negative reviews. In fact, I'm apt to be a little harder on you just to make absolutely sure that I am compensating for any biases I may have.

I initially picked up PRINCE OF MISERY to satisfy the "vampire romance" category in my Halloween 2016 Reading Challenge. (I'm painfully behind, and attempting to binge-read this weekend to play catch up.) But then, as I was reading the book, we get this creepy masquerade scene - and I was thrilled, because conveniently, I also needed a book to fulfill the "a romance with a masquerade/costume party" category, as well, and that seemed like it was going to be infinitely more difficult to find a book for!

PRINCE OF MISERY starts off with a narration from Theron Vansauvage, a vampire with problems. He's vain (he would like to have rough, passionate sex with his own reflection, and often thinks of himself while, um, "feeling himself"); he's cruel (he enjoys hurting people, and feels no guilt); and he's become distanced from society and the world around him (he lives in an enchanted castle somewhere near Alaska, sequestered away from the world with the power of magic). This is because Theron is a vampire, who lives with a handful of vampire valets and all of his human slaves.

Our heroine, Iris, is a black woman with vitiligo. Theron is fascinated by her skin condition, because he has marks on his face, as well. Marks from where one of his past lovers tried to kill him. He likes the taste of Iris's blood and finds her defiance amusing. What better way to utilize that than to turn her into his own personal blood-slash-sex slave? But before he can put this dubious plan into fruition, one of his valets escapes, taking Iris with him, out of the magic curtain and back into the real world.

Heather reads a lot of vintage romances, including vintage vampire books, and you can see their influence in PRINCE OF MISERY. The vampires here are dark, brooding, and obsessive. They're not afraid to get down and dirty if that's required, and they certainly do not sparkle or attend prom. I also liked how Seth and Theron, the two main vampires in this story, have a morality that transcends that of humans - considering how long they live and that they come from another planet(!), it made sense to me that what they consider right and wrong wouldn't really jibe with what I do.

There is also dubious consent in here, as well as descriptions of rape, and of course, since it's about vampires, killing and maiming and torture. I have to give Heather props for that masquerade scene. Not only did it get me through my Halloween Reading Challenge, it was also one of the more gruesome scenes I've encountered in a paranormal fantasy novel of late. And that ending - man, that ending was brutal. I did not see that coming. Quite frankly, I didn't think she dared.

I'd recommend PRINCE OF MISERY to people who enjoy vintage vampire romance novels, particularly from the 80s and 90s. She captures the style perfectly, and it made me nostalgic for the novels I read as a young adult when I was just getting into vampires for the first time.