Crafting with Feminism: 25 Girl-Powered Projects to Smash the Patriarchy by Bonnie Burton 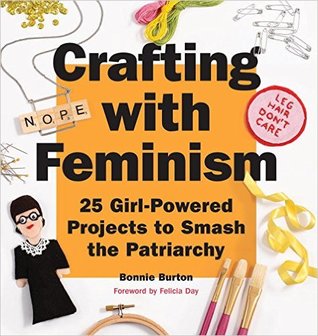 CRAFTING WITH FEMINISM caters to the demographic that identifies with traits of the oft-sneered at "Tumblr feminism." I'm not 100% sure what Tumblr feminism is, to be honest, but it seems to involve a lot of masturbation talk and Joss Whedon fanfics (not usually in tamdem, but it's Tumblr, so you never really know). There isn't anything wrong with this necessarily, but I can see why some of the people who received copies of this book are so upset. If you actually lived through the civil rights era and had to fight for respect and the right to choose and equal pay, it's probably pretty upsetting to see "feminism" paired with "Queen Bitch" merit badges and vagina Christmas tree ornaments. Oh yes. Vagina Christmas tree ornaments. Don't worry, we'll be getting to those.

I was lucky enough to receive a copy of CRAFTING WITH FEMINISM from Netgalley. It was published by Quirk, a publisher I often picture introducing itself in a Troy McClure voice ("Hi, I'm Quirk Publishing. You might remember me from titles such as PRIDE AND PREJUDICE AND ZOMBIES, THE JERSEY SHORE COOKBOOK, and MY BEST FRIEND'S EXORCISM").

Yes, I side-eyed that title pretty hard, but let's be honest - this is Quirk. The name of their publishing company alone should give you a clue what they're all about. Even in the introduction, the writer talks about the importance of not taking yourself too seriously and creating a warm, empowering sisterhood of glitter-wielding feminist Pinterest crafters smashing the patriarchy one sequined pipe-cleaner at a time (to embellish and paraphrase loosely). I think that's true - feminism should be about supporting and empowering women; but you also have to be able to have a sense of humor about it, too, or you'll get frustrated or angry or potentially lose sight of your original goal.

Regarding the quality of the crafts in here - they're a mixed bag. I agree with some of the nay-sayers. A lot of the crafts in here are tacky. We're talking, relegated to the back of the hall-closet to be regifted to Satan's in-laws tacky. That uterus body pillow looks like a prop from a bad 80s exploitation horror film, and the vagina Christmas tree ornaments are just...well, vagina Christmas tree ornaments. They were only slightly less horrible than the tampon dolls.

To be fair, some of the crafts really are cute. I liked the plates and the nope necklace. I would wear the nope necklace. I also thought the tea candle and the girl band cassette tape business card holder were really neat ideas, too - I'd use the business card holder, as well. Even some of the crafts that annoyed me could be worked into something less tacky. But even after reading this book, I don't really see how any of these things are related to feminism, apart from slinging around various buzzwords and really hoping that they catch on. It also makes an effort to score some authenticity points by interspersing feminist song hits, reading lists, and various quotes among the material. They're actually pretty decent...I was pleasantly surprised to see Meredith Brooks's "Bitch" included among the songs, as that is one of my pick-me-up songs for when I need a boost.

CRAFTING WITH FEMINISM was a fun, interesting idea. BUST beat them to the punch, unfortunately, but Burton attempts to put a unique spin on the idea of feminist crafting by being cheeky and crude, appealing to the modern day gal who doesn't hide her tampons in that purse within her purse and goes into sex shops with pride, because vibrator = empowerment. I'm not sure there's enough meat to this book for me to consider buying it for myself, but I think it would be a great gag gift for a woman or man in possession of a certain temperament, or even something fun for a group of friends to do at a bachelorette party or while drinking wine & watching Bridget Jones.