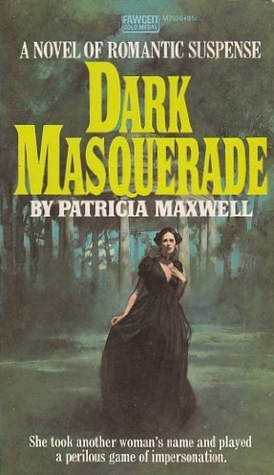 Gothic novels can be a mixed-bag. They were mass-produced in the 70s and 80s, and many of them were bad. You really have to pick and choose to find a good one. DARK MASQUERADE is written by Patricia Maxwell, the pen name of bodice-ripper author Jennifer Blake, and I got it during a promotion where most of her early books and some of her newer ones were free from the Kindle store. I forgot all about it until now, when I was combing through my Kindle to see what goodies were buried on there, and started reading on a whim.

DARK MASQUERADE ticks many of the usual boxes on the Gothic novel checklist. It has a young and resourceful heroine coming to a dark and unwelcoming mansion because of a tragedy. Nobody wants her there, and they aren't afraid to say so, either. The love interest may or may not be the villain. Someone tries to scare her away and, later on, kill her in order to accomplish some craven, dastardly purpose.

The novel is slow to start, beginning with Elizabeth coming to the Delacroix plantation in Louisiana, accompanied by her black servant, Callie, and her baby nephew, Joseph. We learn that the baby's mother, Elizabeth's sister, died in childbirth, and the father died in the Civil War. Before he did, though, he provided for his wife and child, and Elizabeth has decided to take on her sister's identity to ensure that the baby receives his inheritance.

The Delacroix make it clear that Elizabeth's presence as Ellen Marie is being tolerated solely because of the child, the late Felix Delacroix's sole heir. There's an additional black mark against Elizabeth because Felix ditched his childhood betrothed, Celestine, in order to elope with Ellen Marie. If you think that maybe Celestine isn't the kind of woman to hold a grudge, think again. The matriarch, Grand'mere, is slightly more welcoming, but she leaves most of the major household matters to her grandson, Bernard, who is clearly suspicious of Elizabeth, and reluctant to give up Joseph's money.

The atmosphere in this book is incredible. The descriptions of the mansion and the bayou are beautiful and I could easily picture the swamps, the gardens, and the furnishings. The family drama was exceptional, too. Far too often, the characters in Gothic novel are reduced to cardboard cut-outs. I read a book recently, also from the 70s as it happens, called MISTRESS OF THE MOOR, and the bad guy in that book attempts to scare the heroine by cutting up her childhood teddbear and spelling out her name with the fluff on her bedroom wall. In this book, the scare tactics are far more sinister, involving deadly spiders, poison, fire, and various attempts at assassination and subterfuge.

I also really liked Elizabeth. She was resourceful and clever, but also mostly kind. When she did lash out, I couldn't blame her, because it was usually in response to some Delacroix bullsh*t.

Also, Maxwell/Blake has an incredible vocabulary. Here are some of the words I learned in this book: epergne • cabriole • brocatelle • nankeen • demitasse • fainéant • tignon

Anyone looking for a good Gothic novel should pick up DARK MASQUERADE. As of my writing this, it's only 99-cents from the Kindle store!