A Dark-Adapted Eye by Heather Crews 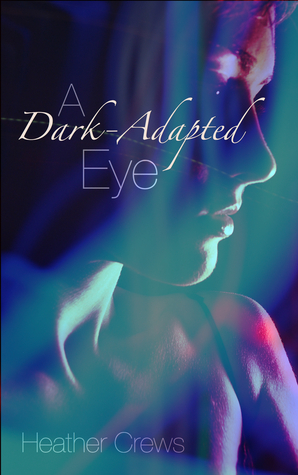 Disclaimer: I received a copy of this for review years ago, and Heather is one of my Goodreads friends.

After reading and enjoying Heather's other book, PRINCE OF MISERY, I was eager to leap into her repertoire to see what other vampire books she had written. I was all set to buy DREAMS FOR THE DEAD, because dat summary, but then I realized that I already had a copy of A DARK-ADAPTED EYE in my library.

A DARK-ADAPTED EYE is about the teenage Asha. She's an orphan and trapped in her home town of La Seca with her brother, Ivory, because it's under siege by vampires. Things get even more dramatic when she finds out that her brother his best friend, Les (who she has a crush on), are both vampire slayers. Things get even more dramatic when she wanders into a vampire club by accident and meets a vampire named Rade, with whom she has a strange but compelling connection that makes her feel like he's familiar...

I really wanted to like this book and I think it has a great premise. There's also a vintage feel to it, in the same way that PRINCE OF MISERY was; they feel like retro vampire novels from the 80s and 90s, when vampires were predatory and scary, and would kill you just as soon as look at you. TWILIGHT changed the status quo for vampires, and as much as I enjoy TWILIGHT, I have to say that these changes were not for the better. I miss the scary days of yore. Heather's bringing 'em back!

The problem is that parts of this book are pretty slow. Even boring. I stopped reading around page 54 the last time I attempted to start A DARK-ADAPTED EYE, and had a difficult time forcing myself to finish with this latest attempt. There's large portions where little, if nothing, is happening. Les and Crisedeys and Ivory aren't very compelling characters (and I really didn't like their names). Rade was great, but he wasn't in the book for very long, nor were many of the other vampires. The dialogue was also tedious, contrived, and didn't feel authentic at times, and I didn't care for the love interest, Les. He's one of those guys who angsts about the girl he likes and sleeps with other women because he just can't. No, Les. That is not how you have relationships. That is the exact opposite of what to do.

I'm always happy to discover new vampire novels I haven't read yet, and I'm sorry that this one was such a bust. But I'm glad I read it, too, because it shows how much Heather's style is evolving, which makes me excited for her future projects (which also hopefully involve vampires).