Covenant with the Vampire by Jeanne Kalogridis 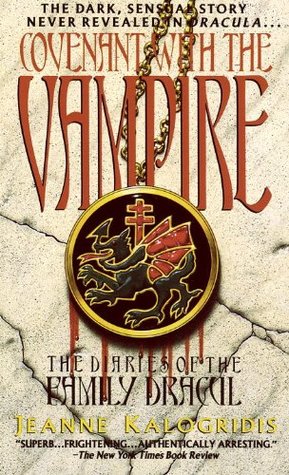 We're doing a Halloween 2016 Reading Challenge in the Unapologetic Romance Readers group and one of the categories is a romance novel with blood on the cover. This proved surprisingly difficult, because while 80s and 90s vampire romance novels were content to own up to their gothic horror roots and splatter their covers with blood, modern day vampire romance novels are much more coy and more likely to feature a woman in a prom dress being coddled by a brooding heartthrob than, well, a bleeding heart.

Luckily, being the old soul that I am, I have a conveniently large horde of retro romance novels to dip into for precisely these kinds of occasions. COVENANT WITH THE VAMPIRE is not a romance so I'm technically cheating, but given that the summary of the book speaks of seductive caresses and the hero's intense love for his wife and child, I figured that this was going to be a case of blurred genres.

I could not have been more wrong. This is a horror novel in every sense of the word. I actually considered putting it down at one point, because it's just awful. There's incest and necrophilia, creepy vampire foreplay, and really unpleasant torture scenes that are described in gory detail although not, thankfully, put into practice. At least not in this volume - I noticed that there are sequels. Perhaps the author is saving those delightful little nuggets for laterz.

COVENANT WITH THE VAMPIRE is about Arkady Tsepesh, a descendant of Vlad the Impaler. He lives in England, with his English wife, Mary, who is pregnant with their unborn son. When he is summoned by his uncle, to care for him in his failing health, his return to Romania is swift. An imposing castle greets him, run by superstitious and resentful servants. Vlad is effusive when he receives the couple and seems genuinely glad for their presence but there is something creepy about him. Mary, especially, finds him off-putting, but can't exactly put her finger on why.

Things get worse as Arkady's sister, Zsusanna, begins to sicken. Various people affiliated with Vlad and his family in some tangential way disappear. One of the servants shows up wearing one of these missing men's watch fobs and rings with blood on his wrist. And, of course, Vlad continues being creepy. Arkady takes a hit as well, with powerful headaches that come and go without warning, and lapses in memory that he is unable to explain. Mary and Arkady are starting to suspect that Vlad's servants' inexplicable terror and loathing of their master are perhaps not so inexplicable, after all.

To be fair to the book, it is a faithful reimagining of Bram Stoker's original DRACULA. Like the original, this book is written in epistolary format from multiple POVs, and the build-up is slow, gradual, and atmospheric. Many retellings often just focus on Dracula, and I appreciated how this book incorporated Romanian folklore about strigoi, as well as vampires' servants and brides.

My problem with this book is that it was just too gross. A lot of the random scenes in this book felt like they were included for shock value. I'm not averse to gore and violence necessarily, but I do think it should serve some purpose. George R.R. Martin, for all his faults, can be excellent at using horrible acts correctly: to show the effects of extreme terror or loathing, or as acts of power by someone who is attempting to curry favor or fear. I did not get that same impression here.

The diary entries also did not work for me. All the characters sounded very similar - bland and disconnected. I thought the story was interesting and liked the twist at the end, but I felt like it was told in a very poor way and that the medium in which the story was delivered was a huge contributing factor in this.

As far as COVENANT WITH THE VAMPIRE goes, I am not a fan. I love vampire stories but I did not like this one at all and will probably not be pursuing the sequels. Oh, and yeah, I was wrong - it's not a romance. (Whatever, I'm still counting it towards the challenge.)