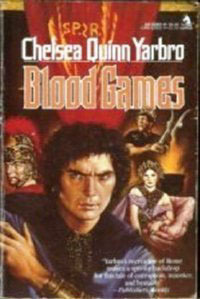 Vampire novels actually used to be pretty difficult to find before TWILIGHT came out and renewed everyone's interest in vampires. I remember combing the shelves for them at various used bookstores and only coming across three in as many years of searching: PEEPS by Scott Westerfeld, MIDNIGHT PREDATOR by Amelia Atwater-Rhodes, and WRIT IN BLOOD by Chelsea Quinn Yarbro. All three are good books, but PEEPS and MIDNIGHT are both young adult books, whereas WRIT IN BLOOD is a bloated historical epic set just before WWI. As a teenager, reading a book like that feels more like work than pleasure, especially given the lengthy details and advanced vocabulary that would make someone who aced the SAT weep.

The books follow a pretty basic formula. It's a reinterpretation of the history of the Comte of Saint-Germain, a historical figure who reputedly claimed to be 500 years old. Yarbro ran with that concept and made him a vampire instead, placing him at various points of historical interest in our timeline. We see him interact with the people in these places as a foreigner, with his lovers, his enemies, and his friends, as he attempts to grasp a political foothold without actually becoming overly involved. The last book I read in this series, THE PALACE, took place in Renaissance Italy, with the Medicis and the Borgias and the terrifying Savonarola. This book takes a total U-turn in the timeline, going back to Nero's Rome, with gladiators and emperors.

In BLOOD GAMES, Saint-Germain is living in a palazzo on the outskirts of Rome. He's well-liked by those in power because of his contributions to the venatio, the events where Roman gladiators and imprisoned victims were forced to battle wild beasts to thte death. If you're curious, you should read the Wikipedia article - I referenced it several times while reading this book just to be sure that I understood all of the vocabulary words, because I am that dedicated.

At a party held by the hedonistic Petronius, a friend to Saint-Germain, he sees an impossibly sad looking woman sitting all by herself. He learns that she is Atta Olivia Clemens, the wife of a powerful Roman senator, Cornelius Justus Silius. Be prepared to hate Justus like no other character you have ever encountered before. He makes Jeoffrey from Game of Thrones look like a member of the Brady Bunch. He sends for the most brutal gladiators under his wife's own name, forcing her to submit as they rape her while he watches before he takes a turn himself. Because if she doesn't, he says, he will call upon all his debts and disgrace her impoverished family before the eyes of Rome. When that isn't enough, he threatens to kill them, sends her slaves to fight to the death in the arena, and exiles her sickly mother to a distant estate where he destroys all her attempts to contact her daughter - he doesn't even tell Olivia when she dies.

BLOOD GAMES has all the features of the Saint-Germain series that I don't really care for - excessive descriptions of costumes, long letters written in very small cursive font, and political intrigue that wears on for just too long to be entertaining. But it's also got some new things that actually surprised me. Saint-Germaine seems a lot more impulsive and impassioned in this book. Yes, the King of the Gary Stus actually loses his temper and makes mistakes that result in the deaths of people he holds dear. At one point, he suffers grievous injuries. Since he's about six hundred years younger here than he was in the previous book, it makes sense that he'd feel younger, and he does. He's much more sexual (although still no peen action) and much more hot-tempered.

I also really enjoyed the focus on the Circus Maximus and how the gladiatorial arena was used for power, vengeance, and political ambitions, frequently in a single sweep. It felt like Yarbro did a lot of research into the games, and the participants who worked both behind the scenes and in the spotlight (either voluntarily or against their will), and considering that this book was written years before the internet was a thing, that makes the attention to detail that much more impressive and daunting. I wasn't expecting the brutality or the blood-shed, of which there is tons, and because of Olivia's barbaric treatment, there are unpleasant descriptions of rape, as well. Yarbro shows how Rome could be ahead of its time in some ways and yet utterly barbaric in other ways.

BLOOD GAMES may actually be my favorite book by her so far. I'm a sucker for Ancient Rome.