WtAFW: Ravished by the Triceratops by Christie Sims 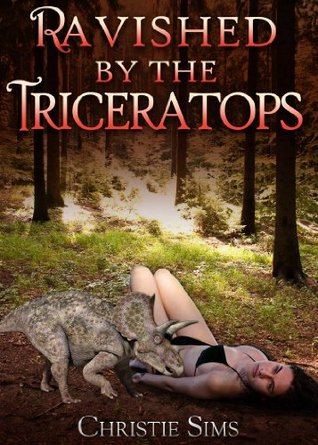 The soundtrack for this review is Kesha's "Dinosaur."

I have a weekly feature that I just brought back from hiatus called "What the Actual Fuck Wednesday," where I read and review some of the weirdest romance novels and erotica out there. Some of the previous entrants have featured humans fucking everything from El Nino to Santa Claus.

RbtT, on the other hand, features the caveman village as being the violent instigators. As part of a coming of age, the women in this village strip naked, arm themselves with weapons, and go out into the wilderness to kill innocent animals in a bloodthirsty fashion. What is this, a Republican rally? (JK, but not really.) The heroine of this book, I think her name is Belira, has her eye on the chief's son and in order to really cement herself as A Person Not To Be Fucked With(TM), she announces to everyone that her kill of choice is Triceratops, and if microphones were invented, she would have totally dropped one in the deathly silence.

The thought of killing animals gets her so horned up that she gives the chief's son a beej before walking off, and then she meditates on how attractive she is to men (so much so that her own father got an erection while hugging her one day, which ew). This thoughtful meditation on the body dysmorphia that can occur from being objectified from one's looks feels out of place in this book, especially when she fails to kill the Triceratops (only succeeding in cutting off one of his horns and ruining him for the ladies) and he knocks her out, dragging her to his love cave where he intends to use her for cockblocking him. Because fair's fair. She is literally fucked.

TAKEN BY THE T-REX was just as bad, but at least it had some interesting sex scenes. Who can forget when the heroine folds herself up as a human-sized vagina for the T-Rex to fuck? Here, the heroine just grins and bears it, despite the fact that the Triceratops apparently has a *checks notes* dick the size of a large muscled arm and testicles the size of a pregnant woman's pendulous breasts. Like the heroine in TbtT, she's afraid he's going to kill her with that dick, but also like the heroine in TbtT, it ends up being the best sex ever. And to bring both books to a parallel, they fuck and run before returning back to the village and acting all coy. In this heroine's case, she's like, "GUYS. GUYS. I FOUND A GREAT NEW WAY TO BRING THESE BEASTS TO HEEL."

Not sure what else to say about this one. It was bad. I think it was supposed to be bad. Despite that, the writing was actually pretty clean. I mean the author dropped a "foetid," which is vocabulary we don't normally expect to see in these types of books. Which actually reminds me-- this is written in a much more modern style than TbtT, which I seem to recall tried to use a sort of Cavemanese. Apart from the fact that it's about dinosaurs, it's pretty bland and not particularly memorable except for the jarring shifts in tone. There's a time and a place for unpacking trauma and this wasn't it.

If you have other books you would like to see me read for this challenge, you can recommend them to me here.