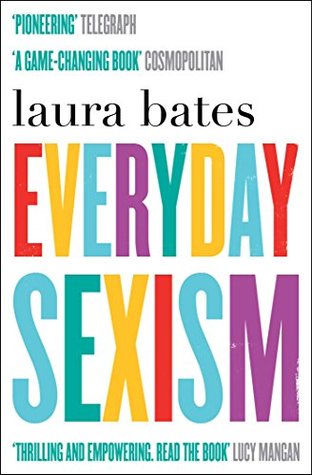 Exhausting. Infuriating. Demoralizing. These are just a few of the words that came to mind while reading EVERYDAY SEXISM. And despite being published in 2014, in many ways things have gotten worse and not better. The overturning of Roe v. Wade, the anti-LGBT+ laws being passed in southern U.S. states, the gleeful and shaming articles posted about any woman who steps out of line by not conforming to society, whether it was Hilary Clinton's campaign against Trump or Amber Heard's testimony in Johnny Depp's defamation trial, it seems like we live in a world that just really hates women. And that, to put it lightly, sucks.

I like the Everyday Sexism project a lot because I think it did an amazing job showing how so many women have these stories to share, either randomly or regularly, either interpersonally or institutionally. With this book, I was kind of expecting essays written by these women about these experiences. Instead, we're given quotes from the Everday Sexism submissions followed by very dry essays tying to these quotes, sorted by subject, and backed by statistics and real life examples.

Overall, I think this is an important book but it seems more geared towards clueless people who don't know how harmful sexism is and less towards people who have a very good idea of what sexism is. For these latter, each chapter of this book is like being beaten over the head with a mallet. The content starts to feel very samey after a while, and some of it is even repeated. Which, again, works well for people who are still learning but isn't so great for people trying to learn more. It was also a little sad to see the chapter on intersectionality kind of lumping together all forms of intersectionality into what felt like one rushed and harried chapter. I feel like the exotification and othering of women of color could have been an entire chapter on its own, for example. The same goes for women with disabilities. Also, I think I would have liked to have seen a chapter about internalized misogyny and TERFs. There's a chapter about men and how men can be victims of sexual harassment and unfair gender standards (which is important, because the same sexism that puts women in victim boxes also makes it so that society believes women are incapable of being the perpetrators of violent crimes or assault), so I think it also would have been good to point out how women can help perpetuate these self-harming standards as well, and how trans-women can be marginalized by bad actor "feminists."

This is a good resource but I fear it's probably already dated... and it's honestly pretty awful to read, so I recommend reading it when you're in a good and healthy emotional space. Triggers for virtually everything apply and the author doesn't hold back.