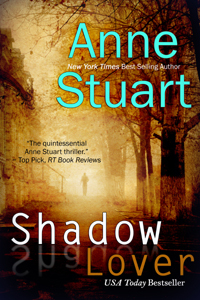 I got an ARC of this when it was first rereleased again on ebook and it stayed with me for years. I kept thinking about it and finally, I caved and bought myself a new copy. SHADOW LOVER is a beautifully gothic romantic suspense about the rich and WASP-y MacDowell family. Eighteen years, the family foundation was cracked when the family matriarch's golden child disappeared on the beach. Now, eighteen years later, Sally MacDowell is dying from cancer and her son has returned-- back from the dead.

Only Carolyn isn't convinced. Carolyn lives with the MacDowells on goodwill. Supposedly, she's the daughter of one of the maids and Sally kept her on out of pity and affection. Never formally adopted, she's been living among them like a changeling, part of the family but also not. She was also desperately in love with Alex MacDowell when he went missing and she's positive that the man who has returned to take his place is an evil impostor intent on seizing the family fortune.

The atmosphere of this-- the cold, the snow, the harsh beaches-- is absolutely magnificently done, and it features some of the best sex scenes I've ever read in an Anne Stuart book. I also thought the is he?/isn't he? tension was really well done. It was fun to see Carolyn struggle against her attraction to this stranger. Enemies to lovers? Yes, please. Especially when it's mixed in with a whole bunch of family drama, murder, and gamma hero shenanigans.

I'm giving this a four because I wish there had been more background between Carolyn and Alex. This is a very short book, and it would have been really cool if there were some past sections hinting at more of the family tensions that are revealed throughout the book. But it's a very high four and I still really loved this book. Anne Stuart is such a talented writer and it's always amazing to me how her style can stay so consistent throughout her works, and her heroes so similar, and yet there are special nuances in each one that make every book stand out. The fact that she was able to condense this one so much and still have it be so emotionally intense is truly awe-inspiring.