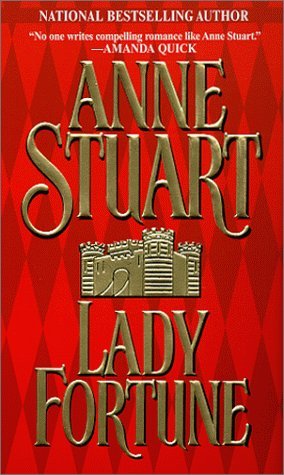 Anne Stuart is one of my favorite authors but I never know what I'm going to get with her. Even though all of her heroes are basically facets of the same character model, they operate on a grayscale of morality and evilness. LADY FORTUNE is interesting because the author decided to make a court jester the love interest, so he's almost a beta hero, except that she also tried to retain some of the menace and danger that her other heroes have. And I'm sorry to say this, but it's really hard to be menacing when you're wearing brightly colored mismatched clothing and bells.

The story is interesting, sort of. Unlike Stuart's other medieval romances, which were darker and had more of a threat of danger, LADY FORTUNE is almost like a semi-dark comedy of errors. Julianna is a young widowed bride being booted from the estate to live with her mother, who is also widowed and is now to be engaged to a large menacing looking knight named Hugh who she fell in love while still married to her evil first husband.

Meanwhile, Nicholas the fool is being sent along with Julianna, ostensibly as a wedding gift but actually as the world's most conspicuous spy. At Hugh's estate is a saint's chalice that King Henry thinks should belong to him. He wants Nicholas to steal it, but he's also conscripted several other people to steal it as well, you know. Margins of error and all that. But Nicholas didn't count on falling for Julianna (sir, this is a romance novel), or that the other would-be chalice thieves would end up being quite so annoying and dangerous.

I guess this book was fine. The tone was kind of all over the place. On the one hand, it talks about how vulnerable women of medieval times were and how they were completely at the mercy of their husbands. Julianna's mother, Isabeau, learned to dissociate her dislike of her husband from her pleasure in the marriage bed, which is a valid coping mechanism, but it also makes her feel guilty because she's a pious woman and women aren't supposed to enjoy that sort of thing. Julianna, on the other hand, was basically a child bride and has learned to hate what goes on between men and women in private because her lack of experience made her think that acts of abuse were totally normal.

There was the potential for villains in the Abbot and Gilbert, but neither of them were really explored to their full potential, and the hints of menace are eclipsed by scenes such as when Nicholas compares certain parts of Julianna's anatomy to tripe or a series of "gotcha" moments where the chalice repeated gets Carmen Sandiego'd by all of the would-be chalice thieves and they basically just scratch their heads or shake their fists and go "CURSES!" or whatever the medieval equivalent of that is.

Not my favorite Anne Stuart book but also not one of her worst.