WtAFW: Having The Dinosaur's Baby by Jane Rowe 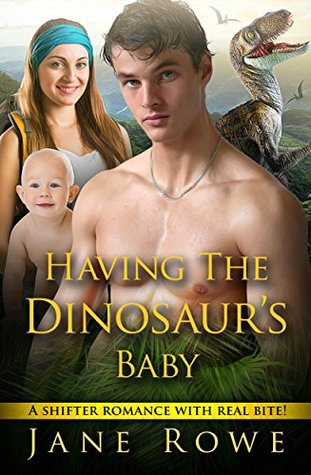 HAVING THE DINOSAUR'S BABY was recommended to me on Facebook for my What the Actual Fuck Wednesday challenge, along with several other dinosaur romances and eroticas. When I picked this one up, I wasn't sure what to think, because it's 200+ long. That's pretty long for a WTFerotica, which usually wrap up before fifty pages because they know their premise is thin. They're just there to shock. What, I wondered, could the author pack in here for 200 pages?

Apart from, you know, the obvious thing.

The book opens with a team of scientists sailing a ship through the Bermuda Triangle, as one does, on their way to Bermuda to look for dinosaurs. But oh no, they're shipwrecked and they end up on a mysterious island filled with with dinosaur fossils but actual living, breathing dinosaurs that shape-shift into cavemen.

I actually wasn't sure what I'd rate this book until the end. Maybe I've been reading too many books by Christie Sims, but I was actually kind of relieved that the heroine wasn't speared with dino dick in this book. The worst that happens is this King Kong moment where Jerris carries off his love interest in his little T-Rex hands (which is actually kind of hilarious). There's some surprisingly feminist messages, and despite the insta-pregnancy and magic immortality/evolution water that Tuck Everlastings these dinobros, I didn't actually hate the story.

The problem is that it's too silly to be good straight-up romance, but it's also too serious to be good troll romance, so it ends up in this weird limbo where it kind of feels like half of what could have been either a really good or a really bad idea. Not sure I'd read more from this author but it was a fun ride.