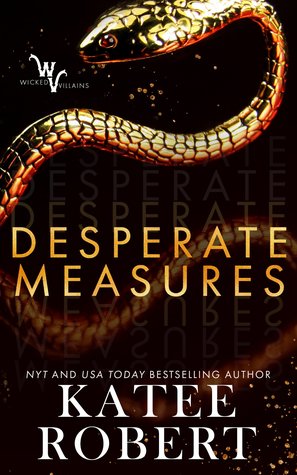 So I knew about this author from her Dark Olympus series, but I only recently found out that she's also pretty well known for her Disney villain erotica series. And obviously, as soon as I figured out that some of my villainous faves were going to be doing the nasty with the heroes and heroines of my childhood, I figured out why these books are the series that launched a thousand shameful inner-fanfictions. Villains rule.

DESPERATE MEASURES is a story about Jasmine and Jafar. It's a little confusing since the world-building in this book is so vague, but Jasmine's father is some unspecified big shot and Jafar coups him to take his power. But he also wants to take Jasmine. The two of them have apparently been attracted to one another for years, and for some reason they have a safe word even though they've never done it, which is handy because they're both into consensual non-consent.

For some reason, Hades is in this book. (I thought for a moment, it was Dark Olympus Hades, but apparently this is the Disney version of Hades because these books have him paired up with Meg-- which I find terribly confusing.) Hades, as he does in the Dark Olympus books, basically owns his own underground sex club and he's into exhibitionism (and all sorts of other stuff.) Apparently this club is where all the movers and shakers go, so Jafar takes Jasmine there as a neener neener (but also as a weener weener, if you get me), and basically things heat up from there.

I thought it was interesting making Aladdin the bad guy. I never did trust Aladdin and the way he lied to Jasmine in the movie was always super sus, so I could totally see all that pathological lying masking an evil side. The chemistry between Jasmine and Jafar was great, but I REALLY wish we had seen them before the coup. I would have liked to have seen the dynamics between Jasmine and Jafar, Jasmine and Aladdin, and Jasmine, Jafar, and her father on page. I also feel like the politics of Carver City were really vague. This is basically porn with plot and I get that, but since that's what the book was going for, I wish the plot had been just a little bit better. I wanted to know more about these weird politics.

In some ways, I actually enjoyed this more than NEON GODS. Maybe because while I was researching Aladdin and ending up down various Wikipedia rabbit holes, I ended up finding about this movie called The Thief of Bagdad which apparently Disney's Aladdin took some inspo from. That movie also has a Jaffar (with two F's) who was played by this dude named Conrad Veidt. And if you look him up, he definitely gives off villainous "Daddy" vibes, so that's basically who I was picturing Jafar as in this book. DESPERATE MEASURES had its flaws, but I still enjoyed reading it.