No Bed in Deseret by Nickolae Gerstner 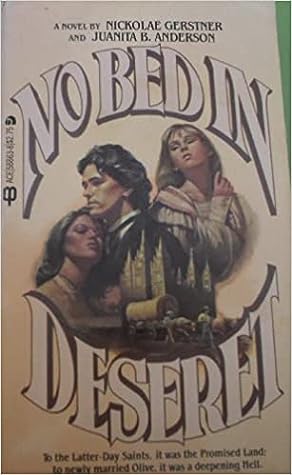 NO BED IN DESERET came in an assortment of retro books I bought for cheap from a thrift store. I've barely read any of them, though, so I'm trying to get through some of my book hoard as I decide what to keep and what to sell or give away. I was really interested in picking this one up because it's historical fiction about a gentile woman who marries into the Mormon faith, only to get screwed over-- repeatedly. The "bad Mormons" trope is not uncommon in bodice-rippers-- Jennifer Blake had some and I think Mormons were the villains in a Sherlock Holmes book-- but this book seems to be trying to take a more nuanced approach.

Okay, so Olive is living in Colorado with her parents when a Mormon convoy or whatever comes in and she ends up falling for a man named Dr. Percival Terry. He courts her and charms her parents, who think, "Huh, I guess Mormons aren't so bad!" Until they find out about the polygamy business. And then they're like, Olive, you can date him but you aren't going to marry him and he isn't allowed in the house. But then Percival saves Olive's younger brother with an experimental medical treatment and Olive's parents are like, "I guess he isn't so bad." And Terry's like, "I will never choose any other wife but you, Olive." And that's good enough. They're married and she goes off to live her HEA.

Except... Percival is a bastard who looks for language loopholes. When they hitch up with another Mormon convoy, there's a pretty sixteen-year-old girl named Sophia. And when her father dies, the other bishops of the Mormon faith decide that Percival just has to marry her-- even though Percival's younger, seventeen-year-old brother, is in love with Sophia and everyone knows it. And Percival is like, "I just gotta do it, Olive, and I'm not technically breaking my vows to you. I didn't choose her! They did!" And Olive responds to this by trying to run away, which results in a caning.

Anyway, the marriage goes through and Olive is forced to endure Sophia, who isn't that bad. But Olive's misplaced spite gave me life. I liked that she held a grudge because honestly, I would too. When she refused to share the glass her father gave them as a wedding present, I guffawed. So when Percival builds them a house, Olive demands a wall dividing the cabin in half, and her half has all the glass windows, while Sophia is stuck with the pig bladder windows. LOL. There's also a Evil Native American Raid(TM) which made me think that this book was going to operate in flagrant defiant of the PC Police. But apparently the Mormons would buy up Native American slaves and then "free" them by taking them on as servants or whatever, which seems sus but okay. Anyway, we get to know Lekatoni and Shokup, who are part of the Shoshoni tribe, and they were actually really cool. And Lekatoni's introduction in the plot ends up coming full circle later, which I really liked.

At the Mormon settlement, Olive endures many things in addition to her husband's plural marriage-- hostile Danites, famine from locust infestation, illness, a near-drowning, and so much more. And then Sophia dies and it seems like Olive is finally going to have her husband all to herself like he originally promised. But then Percival is like, "Olive, babe, people don't like it that I only have one wife and Brigham Young just chose his niece for me to marry, so if I wanna get that religious promotion, I gotta marry his niece and btw, technically I'm not violating my promise to you because Brigham Young chose her for me, and I didn't choose her myself lolz."

Olive, finally, has enough. She decides to leave this spineless, manipulative jerk and return to her parents in Colorado. Which is where the story kind of takes a wilderness survival bent that I really liked, and haven't really encountered since buddy-reading HEAVEN IN HIS ARMS with my friend Heather. I don't want to say too much else because spoilers, but let's just say that eventually, Olive meets someone who wants her to be the only woman in his life, and Percival finds out and is like, "How could you marry another man?" And OUR QUEEN responds, "You married another woman."

So I enjoyed this book a lot. Obviously. It was written in first person, which is pretty unusual for vintage books (unless they're Gothic romances), and I liked how immersive that made this book feel. It also seemed very well-researched regarding the Mormon religion and I liked how the heroine said that the Mormons weren't bad people just because she didn't agree with their way of things, it just wasn't for her, and she felt like her husband had abused her trust and his honor by putting her in the position he had. Which is totally fair. She converted to the faith and made countless compromises, while he repeatedly violated the only request she and her parents ever made.

The girl power element was also really prominent and I loved what a strong character Olive was. She kind of reminds me of the Natasha Peters heroines-- she's dramatic and a little bratty, but she can also overcome whatever life throws at her, and she's super street smart. Plus, she learns and grows from her mistakes, and becomes a lot stronger and more complicated as a human being, which I love to see. You can actually read this book as an ebook on Amazon, and it's FREE if you have Kindle Unlimited (100% recommend). Not sure if the author made any changes or revisions, but I had the original 1981 paperback copy and I'm honestly shocked and pleased by how progressive and modern everything feels. This could have been published today, I think, and that's not something I can say about everything I read.