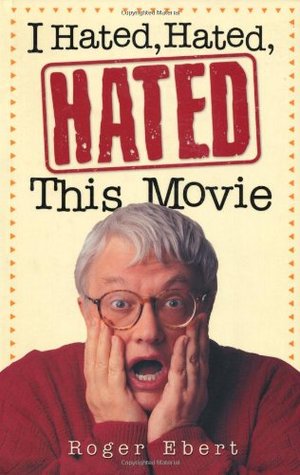 When it comes to how I consume and review media, Roger Ebert is one of my inspirations. I love his large and rich vocabulary, his colorful turns of phrase, and the ways he tries to be sensitive to things like racism and sexism, harmful tropes, and excessive use of the male gaze through the camera lens (especially when inappropriate or tasteless). A lot of people conflate negative reviews with meanness, but there's a difference between criticism and punching down

I HATED, HATED, HATED THIS MOVIE is a collection of some of Roger Ebert's least favorite films. Some of them appear to be a matter of personal taste, and others appear to be truly, objectively, flops. The title is taken from his review of North, which has the dubious pleasure of being one of the most racist children's movies I've ever seen outside of Song of the South. In fact, it may be worse, because as bad as SotS is, it doesn't have the sour streak of maliciousness that North has. On the other hand, I disagreed with his review of the Spice World movie. I'll have you know that I watched that brilliant work of art at least twenty times, and whatever slander Ebert is dishing out here is wrong.

This book is more fun if you have actually watched the movies he's talking about, or at least heard about them or seen other people reviewing them. I Spit on Your Grave is mentioned here, as is Switchblade Sisters, two exploitation films that feature bad things happening to "bad" girls. Home Alone 2 is in here, also known as "the stupider version of the first film that Donald Trump was in." And THANK GOD he also hates A Thousand Acres. I read the book because my mom told me it was a literary masterpiece and at the time I was trying to become more well-read. Nope. Hated it. Hated it lots. His Ace Ventura reviews were probably my favorite because I love those movies but I'm very open about how problematic they are. They're the literal definition of cringe-watching, and yet something about them grips you so compulsively that at the first sight of cleverness, you're completely entrapped.

I also relate to Ebert on a more personal level. I think he's a guy who got slapped with labels like "arrogant" and "pretentious" a lot, and I do, too. There is a certain affectedness that goes into writing and talking like these and you can-- with effort-- "turn it off." But at the end of the day, I feel like me and Ebert are just two people who have shit going on in our lives, and watching and dissecting creative content lets us not only escape, but to sort out our own feelings between the snippets and parsings of all that heavy cinematic effort. The movies that claim you, even when they're weird or unlikable. The shocked joy of finding yourself reflected in a character who sees you deeper than you see them. These are all incredibly satisfying moments that can be had with books and film, and they are like balm to the weary and lonely.

If you are a fan of Z-movies and trash films, and enjoy the likes of MST3K, I think you will really enjoy these collections. I actually found some movies I want to add to my own watch list just because of this book. There's nothing wrong with enjoying the trash you consume as long as you hold it accountable and don't beat around the bush when it comes to calling it what it is. Acknowledging toxic tropes, pointing out surprising moments of cleverness or beauty-- I think these are all really important elements that reviewers can and should incorporate into their reviews.

Jeez, what a good book. Thank goodness I have two more of them.