WtAFW: Ravaged by the Gingerbread Man by Fannie Tucker 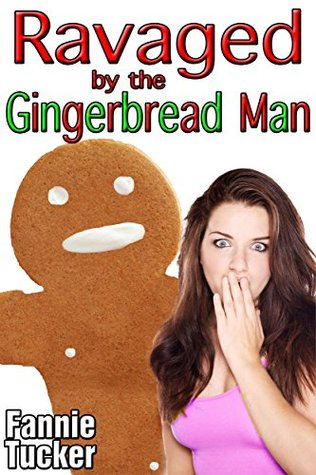 So I run a weekly feature called What the Actual Fuck Wednesday, where I read and review some of the weirdest romances and erotica around that people send to me. Fannie Tucker has been featured several times, because her erotica involves everything from gnomes to puppets to bags of groceries. Somewhere, that woman is literally laughing to the bank, notepad in hand, composing an outline for her next book "I FUCKED THE ATM."

RAVAGED BY THE GINGERBREAD MAN could also be called "OSHA WOULD NEVER" or "DON'T ASK WHAT'S IN THE FROSTING." It's about a girl named Kara who foolishly makes too much dough in the bakery she works at with her friend. "Whatever will I do with all this much dough?" she asks coyly, like we don't know it's going to end up in her vagina twenty pages later.

She molds the dough into a lifesize gingerbread man with a monster cock and foolishly wishes that it were alive. And faster than you can say, "Not my gumdrop buttons!" her wish is horribly granted.

The gingerbread man only speaks in rhymes. He fucks her with a rolling pin to prepare her for his gingerdick, which is just a yeast infection waiting to happen if you ask me. His come tastes like cinnamon frosting and of course, after they finish fucking, she commits the faux pas of asking him for the recipe. The recipe is basically, "Hey, fuck the food before you bake it! Your customers will love it!"

Pretty sure this gingerbread man is actually an undercover FDA agent conducting a sting operation on unsanitary conditions, because of course, Kara is like HAHA INGENIOUS.