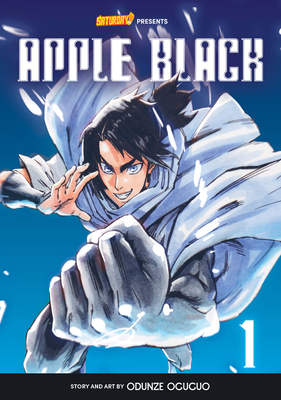 The concept behind this publishing imprint is pretty neat. They take manga-inspired comics from diverse sources. The author of this one is Nigerian, the other of one of my other titles from this imprint is Italian. So the end result is that you, the reader, end up with all of these pretty cool manga-like stories that come from places other than Japan or, more recently, the United States. And I really liked that.

Apple Black is a fantasy series that revolves around the magical school trope. Some people will probably compare it to Harry Potter, but it actually reminded me more of AKATA WITCH (which was also penned by a Nigerian author), especially with the chaotic magic school, the "world is your classroom" vibes, and the way that "wands" manifest. But it has a shounen manga bent, and really reminds me of some of the manga and anime I read and watched in the 90s. There's a really nostalgic vibe.

The story and world-building were a little more confusing. Magic was originally sourced from fruit called "black," which gave people powers that were later diluted over time. The hero, Sano, is the chosen one and was trained by an Yzma-like sorcerer and her Kronk-like pretty boy subordinate, but now they are offloading him to a magic school to further develop his powers. His father was also killed over his research into magic, but rather than seeking revenge over it, Sano is hoping to bring about peace.

I liked all the different characters in this book. I think people who like manga with assembled casts, like My Hero Academia and One Piece, will probably enjoy this a lot. That's not particularly a go-to of mine, personally. When I read manga, I tend to read slice-of-life josei or older shoujo dramas that go heavy on the crazysauce, or dark fantasy manga like Red River and Inuyasha and Black Bird. I was confused about the relationship to gods with the black, and I would have liked a little more backstory on the students in the school and where they were coming from. The author did his best to introduce them one at a time, but I'm still not really sure what the school is for, or how the magic system works.

This is a manga that will appeal to middle grade and up. It's pretty text-heavy so it might be too much for younger audiences, but I could definitely see die-hard stans of MHA and OP really going for this one to get their fix. Not sure I'd read further in the series but I really appreciated the art, the diversity of the characters, the strong women characters (Naomi was hilarious and Opal was so sweet), and the fact that the author wrote a male lead who is peace-loving, naive, and emotionally available and open about his failures with the opposite sex. He was a refreshing change from the brash pervy creeps of this genre.