The Silent Rose by Kat Martin 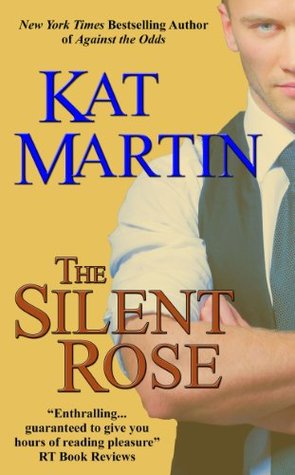 This review makes me really sad to write because Kat Martin is one of my favorite authors and I hate slamming my faves. Granted, I've mostly read her historical romances and this is a paranormal contemporary, so it's a bit different than what I'd usually read from her, but I loooove haunted house stories and I thought the idea of a woman falling for the reluctant heir to the haunted house was super intriguing.

THE SILENT ROSE starts off really well. Devon is a romance novelist who is engaged to be married to some corporate desk jockey. They go to a rustic BnB, which her fiance, Michael, does not even bother to hide his distaste for. They have a weird night. The room has a menacing presence and Devon thinks she sees apparitions. When she talks to the proprietress in the morning, the house's surprisingly gruesome history holds up to the apparations that she thought she saw. SO she does what any enterprising young writer would do: she decides to write a book about her experiences.

Here's where the book gets, uh, kind of weird. The love interest is not the heroine's fiance but the heir of the house, Johnathan Stafford. Which is fine. I'm used to this author having other men and other women in her books. It's kind of her thing. But the hero also has a mistress, a Japanese woman named Akemi, and what makes it really weird is that he clearly has a fetish for this. Like, he speaks (bad) Japanese, collects what he calls "Oriental" art, and he makes his mistress wear a kimono and hair combs and bow to people in greeting when they're in public. When he invites the heroine over to his apartment, he mansplains sushi and art to her, and when she sees him at a Brazilian art exhibition, for some reason he just randomly starts speaking Japanese to her there. He is, in short, a weeb. And that's kind of... gross. I mean, when I read a romance about a hero, I don't really want him to be perpetuating in the exotification of women of color. That's not really very "heroic."

The book also falls a little short with how it portrays the hero's young disabled son, Alex. I didn't get far enough to figure out what his ailment was, but he is in a wheelchair and the way it's described is cringe. The hero describes him as not being "whole" and the heroine says something to the effect that he is being overpowered or overwhelmed by this cold metal, like the chair is a nest of tentacles or something consuming him alive and not, you know, what he uses to get around in his normal day to day. This was written in the 90s, so I get that it's a dated reference and the author is probably leagues more sympathetic now, but I think the language will put a lot of people off because it comes across as ableist.

I'm not one who reads books with the intent of grading them on a "how woke is this book?" scale but I will call out problematic elements as I see them, even if I end up liking the book, because I know that some of the things that don't bother me will bother other people. Usually, I kind of grudgingly gloss over them (especially if they are older), but here there were just SO many things that rubbed me the wrong way that it was like trying to gloss over verbal tree bark.

If you're interested in trying out this author, I'd recommend BOLD ANGEL and DUELING HEARTS, as those are my favorites of hers to date. But this one, I'd say you can probably give a miss.