The American Association of Patriots Presents: How to Talk to Your Cat About Gun Safety by Zachary Auburn 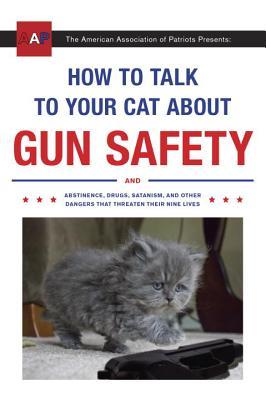 My sister gave me this book as a present and it looked really cute. I thought it was going to be like the Tea Consent video, only with cats and guns. But this wasn't that. Apparently, this is satire, but if something becomes so satirical that people actually take it as face value, is it even good satire? There's a Reddit thread called r/AteTheOnion dedicated to making fun of people who didn't realize The Onion was satire and fell for their gleeful parody articles-- but my parents and I were just having a discussion about how The Onion doesn't really work as well as it used to now that the news is just so insane. Like, I just did a quick search using some keywords and turned up ACTUAL ARTICLES with the following headlines: "Marjorie Taylor Greene Addresses ‘Gazpacho Police’ Gaffe, Makes The Mockery Worse." And, even more recently: "Pregnant Texas woman says unborn baby should count as car passenger after receiving HOV ticket." The United States's political system is literally like some sort of bizarro system of how political systems actually ought to work and for the past ten years, our news is so bad that it sounds like satire.

HOW TO TALK TO YOUR CAT ABOUT GUN SAFETY manages to channel the survivalist, gun-hoarding, Alex Jones-watching mentality of people who would actually probably try to train their pets to shoot weapons. I didn't even think people like this existed outside of the internet until I was out running errands in the central valley and I saw a man wearing an oregone pyramid on top of a MAGA hat, with an Info Wars shirt, and what appeared to be a necrotic left toe. And then I was like holy shit. He was even holding his phone in one of those EMF protection bags. I guess in case the CNN satellites that are definitely targeting him decide to count the number of hate crimes in his web history, idk.

Anyway, my point is, for a book that is allegedly satire, it comes a little too close to the truth. I read this and immediately was like, "Who is this for??" Because honestly, it feels like the only people who will actually like this book are the people it's ostensibly making fun of, and I'm not sure how I feel about that. It's like being so ironic about Rebecca Black that you end up buying tickets to all of her concerts and becoming webmaster of her largest fansite. At that point, are you still an ironic hater? Or do you just stan Rebecca Black?