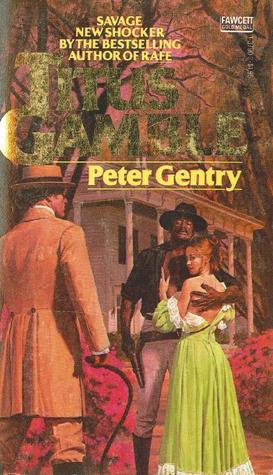 Oh man. This actually started off kind of decently and then plunged into "holy shit, WTF am I reading" territory. TITUS GAMBLE came in a box of old pulpy romance and historical fiction that I bought in bulk. It's the story of an ex-slave named Titus who ran away from his plantation after sleeping with his master's daughter. After that, he enlisted in the Civil War, where he kicked confederate ass and became a decorated veteran, whose fellow soldiers helped teach him to read and write. As a "reward" for his service, he was made sheriff of the same town where he used to be a slave. Uhh, thanks, I guess?

After the Civil War, the town of Brennanburg is kind of a clusterfuck. Land that used to be part of plantations was parceled off and given to some ex-slaves as reparation, while others were forced into actual ghettoes, where they are continued to be exploited by the same people who used to own them on a political, social, and economic level. Part of Titus's new job isn't just to keep the law and order; he's basically there to keep the Black people in town from (rightfully) getting pissed off at the slave-owners and rebelling. Which is kind of a shitty position to be in, because everyone resents him. The worst thing is, he knows it.

Titus actually reminded me a lot of Cleavon Little in Blazing Saddles. I think TITUS was trying to achieve that same sort of social commentary, as well, but Peter Gentry is no Mel Brooks. And I started really not liking TITUS GAMBLE because it started becoming exploitative at the expense of people who are already being exploited. The N-word is literally used hundreds of times in this book, sometimes multiple times per page (with other slurs as well). A Black woman is raped by an overseer. There's incest (including surprise incest, which I think we can agree is one of the worst surprises of all).

I was on board for Titus punching racists in the face (white racists punched in the face: 4+). And I was there for Titus killing white racists (at least 2). I was even there sort of for his relationship with bitchy Fianna, even though she has more issues than an entire bookshelf of FLOWERS IN THE ATTIC. Actually, the whole family is fucking crazy. One of the sons literally spends all his time wearing an old Confederate uniform, pretending to be a war hero, when he actually got his arm shot off by a prostitute he wouldn't pay and all of his medals are stolen from the dead. Whaaaaat. But the rape of Dulcey really bothered me because it felt so unnecessary, and I didn't like that Titus was thrown together with a completely different woman at the end of the book that there was no indication he was going to end up with in the first place.